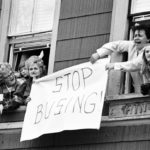 Some people think Boston is the most racist city in America. It is time you come to terms with that. If you don’t believe it, read this. The kind of speech witnessed by a WBUR reporter is not what most Boston people expect, but are we turning a blind eye to what everyone else hears, sees and knows about “us”?

“Hey, n—-r, walk on the sidewalk like you should,” a white man said, in a clear Boston accent, at a black man walking in the opposite direction.(Yes, he used the nuclear “N” word!)

[Reverend Laura] Everett and a young man standing at the corner looked at each other in disbelief.

“Did that happen?” Everett said.

“Did that just happen?” he said, almost simultaneously.

She added: “If you ever need an example of human sinfulness, just look at the roads. We are so cruel to one another.”

“I’ve really never seen that happen before, and I grew up in South Carolina,” the man said. “You see something that’s so hateful and you can’t even rationalize that it just happened.”

As you will remember, Boston Red Sox fans embarrass us with their racist comments to players. Apparently, black baseball players have come to expect this from fans at Fenway. I was interviewed about racism at Fenway in early May. What can you do or say, in the face of random hate speech? What do you say to your children?

Yet, here we sit, all smug and liberal. The rest of the country knows about us. Why don’t we?

Earlier this year, “Saturday Night Live’s” Michael Che called out the city before the New England Patriots played the Atlanta Falcons in the Super Bowl.

“For three hours [during the game], I just don’t want to talk about any social issues or politics. I just want to relax, turn my brain off, and watch the blackest city in America beat the most racist city I’ve ever been to,”

You can’t really say it is just those (%*%) sports fans. But, it is not. Boston has a long, long history of racism. Learn the basics here. If you have an hour, hear the voices for yourself: