Italians, Catholics, and ethnics from Catholic backgrounds are thick on the ground in Massachusetts in 2018. They generally regard themselves — and are seen as — “American.” In 2018 in Somerville, Massachusetts, our Italian-American mayor, Joe Curtatone, is turning his back on the glorification of Christopher Columbus. In Somerville, Columbus Day is now Indigenous People’s Day.

How and why is Columbus Day an Italian thing?

Large numbers of Italians immigrated to the United States in the 1880s, and a hate reaction followed. Another wave of immigration, shortly before the First World War, brought more distrust and hate. To white, north-western European Americans, Italians didn’t fit in. Italians are Catholics, they generalized. Italians are dark-complexioned, at least in stereotype. Some Italians are Anarchists and involved in terrorism. Italians of all stripes faced persecution in the United States.

The name Columbus has long been used to mean “America” (also named for an Italian explorer). Think “District of Columbia”, and “the Columbia River”: these are old terms in America. 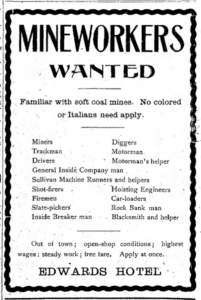 Angelo Noce, founder of an Italian newspaper, La Stella, and fellow Italian-American Siro Mangini, owner of the tavern, Christopher Columbus Hall, were instrumental in the creations of the first Columbus Day in the United States. Mangini’s daughter explained the pub’s name this way:

“He finally decided to call it [a tavern] Christopher Columbus Hall, thinking that he was [the] one Italian [that] Americans would not throw rocks at.”

The first Columbus Day was in 1906, in Colorado. Columbus Day became a federal holiday in 1934. The Knights of Columbus, a Catholic fraternal service organization, was instrumental in the creation of the holiday. (Founded in 1882, the organization named itself after Columbus as a way to reflect that Roman Catholics were always part of American life.)

Millions of people died of war and disease as a direct result of the Spanish arrival onto what became North America and South America. Columbus led the way, in search of wealth and opening the door for Christian missionaries. This history is known to most school children, now. But Columbus remained an Italian-American hero, and his Day was an Italian-American pride day.

Mayor Joe put an end to that. He took input from people in our city. He made the change to Indigenous People’s Day.

“Columbus Day is a relic of an outdated and oversimplified version of history,” Curtatone wrote. “We all know there’s more to the story than a nursery rhyme. In Somerville, we will now pay tribute to a history that runs much deeper than the events of 1492.”

For more on Italians and Columbus Day, go to this link, which is one of my favorite podcasts.