Amanda Gorman, the 2020 Youth Poet Laureate, was a special needs student. She has auditory processing problems. As a child, she did not understand speech as other children naturally do. She could hear it, but she could not understand some speech sounds. (A speech sound is part of a word, like “ch” or “oo.”) She also had difficulty speaking. She read later than her peers, too. However, special education augmented her schooling and she learned to read, understand and speak more easily, and she grew to love language.

It seems ironic that someone with speech and language challenges would stand before the Nation and read her work, out loud, when she is still in her early 20’s. Most people would get tongue-tied reading at such a huge public event, like a Presidential inauguration. It is a tribute to her, and also to the adults in her life that she was given support that got her to that place.

Let’s talk about mothers! Amanda Gorman’s mother, Joan Wicks, says this about special needs children, “Every child has a gift, it just has to be discovered,” she says. “Where there’s a deficit, there’s a place where the child makes it up.” [source]

In Amanda’s life, she resisted using accommodations that she was offered, at times, but found her way into reading and loving written language. It made all the difference.

I used to be a special needs teacher, specializing in people with sensory impairment (deaf and blind people). In the time that I did this work, I frequently had to explain auditory processing problems and cortical blindness. In these conditions, the ears and eyes work normally, but the ability of the brain to interpret the sounds or images is impaired. This is not about general intelligence; it is about the areas of the brain that make sense of sight and sound.

I mention this to show the power and complexity of the visual processes of the brain. 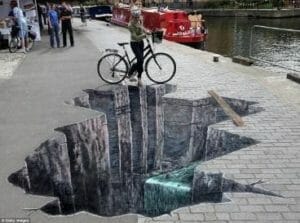 People with normal eye-to-brain communication can be tricked by two-dimensional images that look like they have depth. It is not your eye, but your brain, that tells you that there is a big hole in this sidewalk. Your eye sees a flat surface, but your brain sees shadow, light, and distortion that is interpreted as a big hole. That is normal. Makers of optical illusions play on how a normal brain works.

Someone with cortical blindness may get no signal between the eye and brain (and see nothing). They may get a signal from the brain, but it may have no meaning. People with this type of deficit may be unable to recognize faces, or read letters, or describe an object that they “see”. Oliver Sacks described this condition in his book The Man Who Mistook His Wife for a Hat.

… P. is unable to recognize the rose in Sacks’ lapel, describing it as “a convoluted red form with a linear green attachment.” He is encouraged to speculate on what it might be, and guesses it could be a flower. When he smells it, he comes to life and knows it.

The auditory processing problems are parallel. A common auditory processing problem is tone deafness. People with normal ear-to-brain communication can hear different pitches in the notes of a song. People who are truly tone deaf cannot “hear” the difference between a C and F chord. You can play one after another, and that person hears the same thing.

This problem is usually caused in the brain, not the ears. Their ears vibrate at a different frequency when a C chord comes in than when the F chord does, but they “hear” the same thing in their brain.

That is what the Youth Poet Laureate learned to do in order to win the honor to speak at the Inauguration of the 46th President of the United States.

What is a Poet Laureate? The poet laureate of the United States is appointed annually by the Librarian of Congress. They were initially called “a chair of Poetry of the English language in the Library of Congress”; since 1986, the title is “Poet Laureate Consultant in Poetry.” I see the position like a National Artist in Residence post.

Over the course of the one-year term, which lasts from September to May, the U.S. poet laureate presents a reading and lecture at the Library of Congress and often engages in a community-oriented poetry project with national reach. [source]

The National Youth Poet Laureate is not a government award. Their program partners with local literary arts and youth civic organizations across the United States to offer city and county-wide Youth Poet Laureate programs. This national organization started as a project for Urban Word, a youth arts organization, and has grown, city-by-city, into a national competition for young poets.  [source]

In case you missed it, this is what she wrote and read:

Amanda Gorman’s “The Hill We Climb”

When day comes, we ask ourselves, where can we find light in this never ending shade?
The loss we carry, a sea.
We must wade.
We’ve braved the belly of the beast.
We’ve learned that quiet isn’t always peace.
And the norms and notions of what just is, isn’t always justice.
And yet the dawn is ours before we knew it.
Somehow we do it.
Somehow we’ve weathered and witnessed a nation that it isn’t broken, but simply unfinished.
We, the successors of a country and the time where a skinny Black girl descended from slaves and raised by a single mother can dream of becoming president only to find herself reciting for one.
And yes, we are far from polished, far from pristine, but that doesn’t mean we are striving to form a union that is perfect.
We are striving to forge our union with purpose.

To compose a country, committed to all cultures, colors, characters, and conditions of man.
And so we lift our gaze, not to what stands between us, but what stands before us
We close the divide because we know to put our future first, we must first put our differences aside.
We lay down our arms so we can reach out our arms to one another.
We seek harm to none and harmony for all.
Let the globe, if nothing else say, this is true.
That even as we grieved, we grew.
That even as we hurt, we hoped.
That even as we tired, we tried.
That we’ll forever be tied together victorious.
Not because we will never again know defeat, but because we will never again sow division.
Scripture tells us to envision that everyone shall sit under their own vine and fig tree and no one shall make them afraid
If we’re to live up to our own time, then victory won’t lie in the blade, but in all the bridges we’ve made.
That is the promise to glade the hill we climb.
If only we dare it’s because being American is more than a pride we inherit.
It’s the past we step into and how we repair it.

We’ve seen a force that would shatter our nation, rather than share it.
Would destroy our country if it meant delaying democracy.
And this effort very nearly succeeded, but while democracy can be periodically delayed, it can never be permanently defeated in this truth.
In this faith we trust for while we have our eyes on the future, history has its eyes on us.
This is the era of just redemption.
We feared it in its inception.
We did not feel prepared to be the heirs of of such a terrifying hour, but within it, we found the power to author a new chapter.
To offer hope and laughter to ourselves.

We will not be turned around or interrupted by intimidation because we know our inaction and inertia will be the inheritance of the next generation.
Our blunders become their burdens, but one thing is certain.
If we merged mercy with might, and might with right, then love becomes our legacy, and change our children’s birthright.
So let us leave behind a country better than the one we were left.
With every breath, my bronze pounded chest.