I had a real estate client who didn’t understand why his friends dreaded going home for Thanksgiving and Christmas. The movies about holidays from Hell weren’t funny to him. He felt like he was missing something.

He was lucky. The values he grew up with were the values he still had. Many people leave home and develop values that do not match your family of origin. Many parents fail to respect these changes in moral framework and the behaviors that go with those personal decisions.

As soon as Election Day trepidation has passed, the next thing many people are not looking forward to is Thanksgiving with family.

Why are people attracted to conspiracy theories?

The Atlantic has a column called How to Build a Life. (I don’t know if it is behind the paywall, since I subscribe there.) Early in November, Arthur C. Brooks wrote about how to love people who love conspiracies. It was a good read that adds to ideas that I have suggested before.

Arthur C. Brooks brought up a study that estimated that roughly half of all Americans agree with some opinion that is a conspiracy theory. American history is full of events where “secretive others” were seen as conspiring to ruin America; examples were Masons, or Catholics, or Communists. There are so many others, you can fill in the blank.

Here are the commonalities of conspiracy theories, as defined by the authors of the study, J. Eric Oliver and Thomas J. Wood of University of Chicago:

First, they locate the source of unusual social and political phenomena in unseen, intentional, and malevolent forces. Second, they typically interpret political events in terms of a Manichean struggle between good and evil. As Hofstadter (1964, p. 29) famously described, “the distinguishing thing about the paranoid style is [to think] that a vast or gigantic conspiracy is the motive force in historical events. History is a conspiracy, set in motion by demonic forces of almost transcendent power” Finally, most conspiracy theories suggest that mainstream accounts of political events are a ruse or an attempt to distract the public from a hidden source of power (Fenster 2008). [source]

That seems sort of grandiose– good and evil! – but there is some logic that the power of the opposition is secretive and somehow super-human in scope.

Think about people who agree with you. Some of them look for ways to understand how the f’ed up things in the world could possibly be happening. In moments of anxiety and overwhelm, the idea of some big, secret, powerful force makes some sense.

How can anyone related to me think like that?

A big mistake we make in confronting conspiracy theories is assuming they provide nothing but harm to those who hold them. In fact, a tendency toward these beliefs may be wired into us, because they could have been helpful to our survival at times. For example, some scholars have theorized that true conspiracies by hostile forces in past times—before modern institutions such as civil rights and police protections—could be so deadly that it was better to be safe than sorry by embracing a paranoid idea that might well be false.

Conspiracy beliefs can also bring tangible benefits for well-being. For example, they can provide a sense of control in a chaotic world. Research has shown that people who feel they have little control over their lives are more likely to hold superstitions (for example, that the number 13 is unlucky), see spurious correlations (in, say, the stock market), and believe in conspiracies. Similarly, people with a need to feel unique and special may gravitate toward unusual beliefs, such as conspiracies, held by a minority of people. [source]

Next week, I will be writing on the first point. The second one is so very healthy, and something I have not put forward before. So, I’ll say it again: 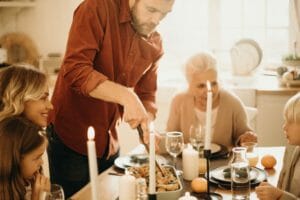 Focus instead on what you have in common.

You are a family and have common experiences. Some of them are positive. When you are with your family, find adult ways to repeat the kinds of activities that bring happiness to your family group. That may be sports, game playing, joke telling, singing, taking an outing together.

Whatever engages you and your loved ones in thinking about something other than the forces that are ruining America or the world will increase the chances of an enjoyable family time.