Among other things, white privilege means that I (a Jewish white woman) would be harming people of color if I took the microphone to “explain their problem.” It is better for me to be quiet, and amplify the voices of people who know better. 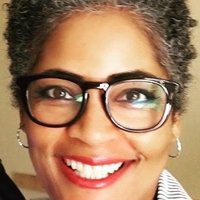 I share with you the words of Lori Lakin Hutcherson, editor of Black Good News. She can tell you her experiences as a middle-class, well-educated Black American. (I can tell no such story, since I have not lived it.)

I encourage you to read what she said. When you come back to my words, after reading her opinion piece, I highlight these points:

Why “be nice, be respectful” is not enough

Lori was responding to Jason, who was asking to be enlightened about this “White Privilege” he is accused of having. I give Lori a lot a credit. My blood was already boiling when I saw quotes around “White Privilege” and I read Jason’s tone as mocking. However, Lori knows him. She gave a real answer, as if it were a question asked in good faith. Brava!

Lori also answered the underlying discomfort that Jason expressed. He wanted enlightenment about why it’s not enough that he’s a respectful white guy.

In her response, she writes:

…I hope my experiences shed some light for you on how institutional and personal racism have affected the entire life of a friend of yours to whom you’ve only been respectful and kind. I hope what I’ve shared makes you realize it’s not just strangers, but people you know and care for who have suffered and are suffering because we are excluded from the privilege you have not to be judged, questioned, or assaulted in any way because of your race.

As she continues, she names a behavior, and requests a change in Jason’s behavior.

As to you “being part of the problem,” trust me, nobody is mad at you for being white. Nobody. Just like nobody should be mad at me for being black. Or female. Or whatever. But what IS being asked of you is to acknowledge that white privilege DOES exist and not only to treat people of races that differ from yours “with respect and humor,” but also to stand up for fair treatment and justice, not to let “jokes” or “off-color” comments by friends, co-workers, or family slide by without challenge, and to continually make an effort to put yourself in someone else’s shoes, so we may all cherish and respect our unique and special contributions to society as much as we do our common ground. [bolds are my edit–Rona] 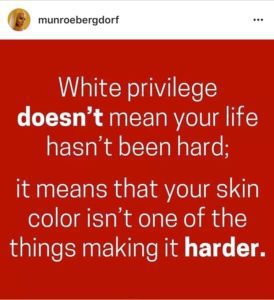 Since this Opinion piece was published in 2017,  a lack of awareness about white privilege has remained.

Let’s face it, white privilege is a hard term to swallow. People don’t want to be defined by the color of their skin (especially when being called out for a negative thing).

Privilege is easy to deny; there is always someone else who has more. That old sin, envy, is easy to awaken. Financially distressed white people don’t feel privileged.

The talking points, for white people:

If you want to understand the subtle undermining of the spirit that goes with being Black in America, Lori tells her story. It is full of overt meanness, polite prejudices, and moments of invisibility. If you don’t understand white privilege, it’s a good primer. Here’s that link, again.