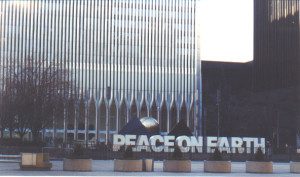 I remember when the buildings of the World Trade Center in New York City went up. There used to be a fruit market on that site. It was sort of like Haymarket.  We used to stop there on a weekend to get fruit. I remember huge oranges and a friendly guy with an accent who used to tease me that his apples were bigger than my head. Then it was gone. Then there was the Trade Center.

My brother worked on the electrical crew for at the World Trade Center in New York City for 14 years. His office was on basement level 6.  The basements in that building went real deep. He was there in February, 1993,  when the first terrorist attack occurred there. Is there anyone who still doesn’t know that September 11th was the second attack on that building? As a member of I.B.E.W. Local 3 my brother was at the Labor Day Parade on the weekend before the airplanes were used to destroy the buildings. My nieces were with him on September 8, 2011; they had no idea that would be their last time at those buildings.

My family always had some history with the World Trade Center. We loved the fruit market there, then my brother tended the building for years.

I spoke to my brother this weekend after he attended this year’s Labor Day Parade. He wandered the area around “ground zero” and reflected on how much of his adult professional life was attached to the World Trade Center. He, truly, lost a piece of himself when those towers fell.

To celebrate the year 2000 — there was a big peace display in the courtyard.  Ironic, yes?

I am currently writing a book on real estate. One of my themes involves learning to ignore sales jargon about “home.” A house is a building; it is the life that is lead there that makes it a home. On closing day, the house is a house even if it was someone else’s home the week before. The house-ness goes away with the previous owner.

Conversations like the one I had with my brother this weekend reminds me that he had a long professional life in a building that millions of Americans now feel attached to. What is the quality of that attachment for people who never stepped foot in the World Trade Center?  It is hard for me to really understand it, because I have a history there. I was not equally moved to remember the bombing at the Alfred P. Murrah Federal Building.  Why is that? There was no big, national ten-year moment of silence on April 19, 2005 to remember that an office building — including a daycare center – was bombed in as a political statement in Oklahoma in 1995.

Back to my book topic. Am I just wrong to think that I can encourage people to be more detached and rational when buying a house?