Now that the gutter problems, ice dams, and roof problems have stopped, it is time to look at your basement. If we get a sudden melt – usually caused by warm rain – basements that tend to flood will. From what I have been seeing and hearing, basements have been handling the brief melt well. We seem to have lucked-out by having a short melt, then a refreeze, overnight.

For those of you who don’t know how sump pumps work, here are the basics: 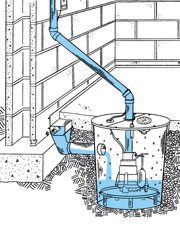 A hole is dug under the slab of the basement to form a pit. Water collects in the pit, well under the slab (sometimes as much as 3 feet down, sometimes less.) A pump is set in the middle of the pit, with a switch that goes on based on the rising water level (like a toilet float.) When the ground water rises, the water in the pit gets pumped out by a tube to the outside. When it works right, the water is pumped out and the basement floor no longer gets wet.

Most people in-the-know recommend a perimeter drain. This is like the gutter on your roof. It collect water and directs it into the sump pit.

In addition, a battery back-up and a second pump are a prudent addition. 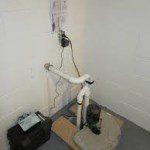 Home-made sump pump installations frequently have one or more of these problems: