Are you trying to figure out what to do when you witness hate or harassment in public? Here’s a Bystander 101 lesson. 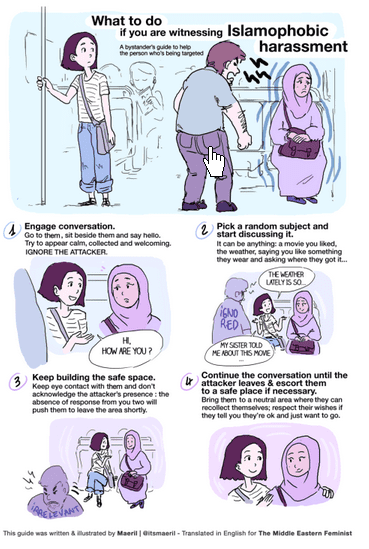 What is right with this picture?

What’s wrong with this picture?

Maeril’s  work is well done and important. I mean her no disrespect. Women, in general — and Muslim women in particular — need to own their own power, their own agency, during this time of increased verbal violence in public places. Women, as well as supportive men, need to know how to intervene during public incidents of hate speech. The decision to intervene requires training, awareness, some go-to practices, and much more emphasis on the real and possibly deadly danger a person may walk into.

Back to the cartoon:

Numbered 1: Sit beside the person and speak to them.

Sit? How did the intervener get around the aggressive man to sit in front of him and next to the woman in hijab? That move would have been very dangerous to do. It resulted in the intervener having no exit strategy, were the man to start striking her.

Instead: Move near the targeted woman and stand or sit in a way that allows for a direct conversation with her, but also the ability to keep an eye on the aggressive man. Do not place yourself in a position where you (and the target) cannot exit.

Numbered 2: Yes, speak! This strategy is very effective (as long as there is no language barrier.)

Numbered 3: Just keep going until the aggressor completely runs out of steam.

It might take more than one person, and more than talk to get someone to run out of steam. It is a dangerous assumption that they will just give up. The absence of attention may cause the aggressor to escalate to get the attention back. That is why there is greater safety when there are a greater number of interveners.

How is talking enough to build a safe space?

Instead, or in addition: Offer to create physical distance. Invite the target to move into a group of people who will block the line of sight between the aggressor and his target. Always ask! As Maeril mentions, respect the autonomy of the targeted person. “Do you want to get away from this guy?” “Would you like to sit over there?”

Numbered 4: Continue the conversation until danger is gone. Escort them to a safe place.

I give this a standing ovation! Most of the bystander intervention stories you are going to hear will tell what the intervener did. We rarely hear about what happened to the target, when the shouting stops. They have run off into the night, seeking safety, never to be seen again.This is not enough. When the adrenaline fades, the target may still need your help to get home safely. It is important to stay with them, until you know they are safely headed home.