I find myself in the middle of Chanukah. All gifts that I am giving are mailed off to people I haven’t seen since before Passover (or even before that). No collective baking this year. Or latke frying. No candle-lighting parties.

Christmas is around the corner. Even The Illuminations Tour is virtual.

For Christians, churches are still closed. Chanukah is not a synagogue holiday, like our New Year is, in September. This December, Christians will be adjusting, like we did last fall. It is not the same to hear the prayers and songs without seeing the people in your worship community.

When I was small, we had a large family gathering (hosted by a maternal aunt, and later a cousin) where little gifts were shared and latkes were fried and eaten. It was fun, but it was far from the most important holiday of the year. Even at a young age, I felt overwhelmed by consumer Christmas. It was weeks and weeks of green and red in school, and in all the stores, and all over TV.

As an adult, I know many Christians who feel the same way : overwhelmed. For many, the hoopla of shopping frenzy runs against their practice of observing Advent. That is the month leading into Christmas when Christians prepare for the coming of Jesus. Preparing with a frenetic Black Friday is not consistent with the meaning of the holiday.

Christmas wasn’t always about gift giving. This post discusses Christmas gift-giving and explains that Christmas giving, until the mid-19th century, was charitable giving from wealthy people to needy people. There are still vestiges of charitable giving at Christmas, although it is frequently tied to urges to make donations now, to secure your tax deductions.

In the early 1800s, Christmas was celebrated by wealthy families gifting food and drink to those in need. But in the mid-1850s, families (fueled by retailers) began turning the holiday inward. By 1890, children were lining up at department stores to present their wish lists to Santa. [source]

2020: What is happening in the good economy?

If you are figuring out how to celebrate, and not how to find money for anything special, you are lucky. The top ¼ of America is sitting pretty, while many others are struggling.

More than in the past three recessions, the economic lowest-earning one-quarter of Americans have been desperately hard-hit by this Covid-related recession.

“The economic collapse sparked by the pandemic is triggering the most unequal recession in modern U.S. history”

At the national level, “About half of the employment lost between February and April has been recovered. But the pain is not spread evenly.”

o Hispanic Origin: “Hispanic Americans saw the steepest initial employment losses and still have the most ground to make up to reach pre-pandemic employment.”

o Age: “The pandemic recession took the greatest initial toll on young people. Twenty percent of all Americans ages 20 to 24 lost employment in the early months of the pandemic. And those ages 25 to 34 have recovered only 43 percent of lost employment.”

o Gender and Family Dynamics: “The pandemic economy has affected mothers and fathers differently. Mothers saw greater initial drops in employment than fathers…Recovery among mothers whose youngest children were 6 to 12 has lagged behind fathers.”

Note that the chart below shows four recessions. The graph on the current recession covers the first six months, whereas the historical data include the full twelve month period. [Source for graphics below] 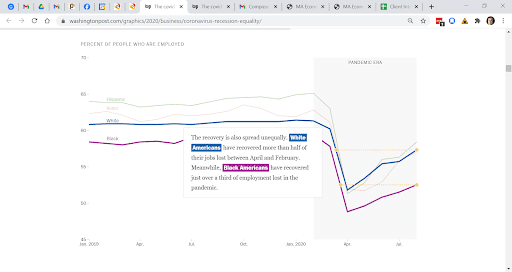 Count your blessings. Be generous.