One out of ten girls is catcalled before she turns eleven years old. Eleven years old. That’s fourth grade. Guys, I know some of you are thinking, “What’s wrong with telling a girl she is pretty?” What’s wrong is that the message in society is that pretty is the most important thing. Boys and men, you might not get this intuitively. Guys, you want to be attractive, too. I get that. But you are not told that is the be-all and end-all of your adult successes.

“Catcalling and other objectifying behaviors can make girls feel their value lies solely in how they look as opposed to what they think or the things they can accomplish. That kicks off a domino effect of girls engaging in self-objectifying—feeling overly concerned about how they look, comparing their bodies to those of other girls and women, and even judging other girls based on their looks.” 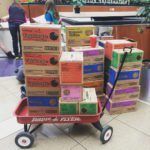 The Girl Scouts of America know this is a problem for their girls. To succeed in today’s world, Girl Scouts need to know more that making campfires and selling cookies.

Emphasize that since catcalling itself is the opposite of polite, there’s no need to smile, laugh, or engage in conversation with the harasser.  In fact, make sure she knows that smiling, laughing, or chatting with someone who makes lewd comments can unintentionally encourage more of the same kind of behavior and even put her in danger. Help your daughter to follow this rule of thumb: If an adult is making her feel uncomfortable or acting inappropriately, she should get away from that person as soon as possible and immediately tell you or another caring adult about what happened.

Meanwhile, if another kid at school or in an extra-curricular activity is making her feel uncomfortable with catcalls or other forms of sexual harassment, she can either walk away and tell an adult, or, if she feels safe enough to do so, explain to the other child that such actions aren’t okay, and that they need to stop. Still, if that behavior continues, your daughter will need to tell a trusted adult—not just to help herself out of a tough situation, but because the harasser could be doing the same or worse to other girls who might not have the strength to speak out about it.

I would add some specifics here:

I teach a bystander class designed for teenagers. Young people benefit from more sample statements to help deflect bias speech of all kinds (whether it is sexist speech, or bias speech against ethnic, religious, or racial differences.) I would advise parents to empower their children by teaching them basic ways to stand up against biased speech. In the case of catcalling:

Teach your children to keep walking when they are being catcalled on the street. In open space, it is best to keep your distance from disagreeable people. Posture matters. Show your children how to look strong and assertive when walking in public places. Head upright, eyes forward, gait steady and not running.

If your child must address the catcaller:

Tactic: Naming the behavior. Describe the behavior in non-judgmental language. In the case of catcalling, I think a question, in a neutral tone would work:

“Did you just whistle at me?”

“Did you just call me ‘sweetheart’?

Tactic: I messages. Stating a personal reaction to the comment.

“I am not your sweetheart.”

If someone catcalls, and then follows your child:

If someone catcalls your child and then follows her, teach your child to make noise and get attention. She should walk towards other people. She should shout or bang a wall to draw attention to the situation. Most people are good and kind. They will help a little girl who is being catcalled. Some of the things she can say:

“I don’t know these boys (men). They are bothering me!”

“Someone help me! These boys (men) are following me.”

Back to what the Girls Scouts advise: