Trevor Noah said it all.

Link is here. As a bystander intervention trainer, I am in awe of Diamond Reynolds. She is the woman who watched Philando Castile — her lover and father of her child — be shot by a policeman. She remained deferential to the police. She called him “sir”. She followed police instructions. She let the police take her child from the car. She didn’t lose her temper or forget what she needed to do.

And she videoed it all.

In a real “All Lives Matter” world, the policeman would have not panicked. He would not have shot Philando Castile. After the shooting, the officer would have been indicted for shooting a licensed gun-holder who followed the law. There are police standards for professionalism. This officer failed them. He was afraid and killed a man because of that fear. The fear has a name. It starts with R and ends with -ism. 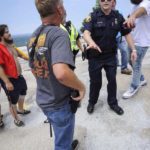 Meanwhile, Shaun King shares that not all gun licensees are created equal. He published a picture of a policeman — not holding a gun — who “talks down” a white man threatening to brandish his weapon. All, in the presence of several unarmed civilians.

Although none of this proves anything, I go with the preponderance of evidence. Police react based on their prejudices. Those prejudices are killing people.