For anyone who says it cannot happen here, learn your history! It did happen here.

First The rallying theme: Everyone wants smart, healthy children, right? That’s rational and logical.  The method: get inferior genes out of American life. This was a program called eugenics. Eugenics led to denying people the right to marriage, and later, forcing sterilization on those with inferior genes. (When science showed that genes were not a good excuse, sterilization continued for people who demonstrated poor morals and incapacity as parents.) 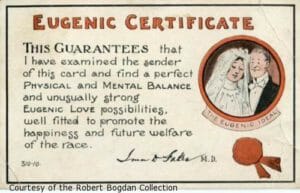 Second “White” was defined as genetically superior to other races. People who were “white” had what it takes to prosper in America. Those who can’t prosper are a burden.

Third “White” was redefined to a more restrictive “Nordic race”  in order to exclude eastern and southern Europeans, and Jews, and also Catholics. Our Congress passed laws to limit immigration based on this. Our States passed laws legalizing forced sterilization of “undesirables.” Blacks, Mexicans, and Asians were also swept up in the move to limit the number of undesirables in the country. (P.S. The Nordic Race is the same as the Aryan Race or Master Race. This is not just old and dead history; the concept of Nordic Race is still with us. ) 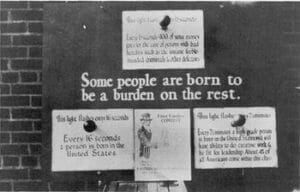 Fourth Disabled people, even from good blood lines, should not reproduce. They were isolated, restricted from marriage, and many were sterilized.

Fifth Poor “Nordic-stock whites” were “proven” to be genetically inferior. They had family histories of “undesirable” behavior, such as drunkenness, illiteracy, and loose sexual morals. Pseudo-scientific studies were done to prove that such behavior ran in poor families. This is the stereotype that led to the labels “hillbilly” and now  “white trash”.

Characterizing people as “undesirable” allows the powers-that-be to separate humans from the mainstream and do with them as they will.

Compulsory sterilization laws adopted by over 30 states that led to more than 60,000 sterilizations of disabled individuals. Source

Among the “disabled” were epileptics, visual and auditorily impaired people, mobility impaired people, and also, morally weak and feeble-minded people. The term “moron” was coined to define someone of low intelligence who was likely to exhibit criminal or immoral behavior. Many who had test results that showed they were “morons” were uneducated or spoke another language, or — in one famous case – failed an IQ test administered while she was waiting to have appendectomy surgery.

You know who loved this body of work? You guessed it. Hitler. He took it one step further. Instead of sterilizing people, and waiting a generation, how about a final solution?

“There is today one state,” wrote Hitler, “in which at least weak beginnings toward a better conception [of citizenship] are noticeable. Of course, it is not our model German Republic, but the United States.” (from The L.A. Times)

When I speak against Nazis,  when I speak up for immigrants, minorities, disabled people, LBGTQ people, I speak up for myself, a “not Nordic” white person. Racism is about who gets to control American life. It’s about who is allowed to live, and love, and have families in America. This election is about whether it is OK to write people out of our society. When you write people out of society, unspeakable things happen.

Jay Gonzalez for Governor Governor Charlie Baker has demonstrated that he is inclined to support Republican values regarding immigration. That is enough to make him unfit for office.

Yes on Question 3 Every law-abiding person is allowed on our streets, in our stores, and in our hospitals and doctor’s offices. Any restriction of any person is an assault on the civil liberties of everyone. Yes on 3 maintains fair public accommodations.

Read the history of your State.