I have been writing a lot lately about how fear wears on people. The thing we’ve been fearing in 2020 is a virus. An invisible thing. Yet, we’ve been feeling the fear and the stress, and it makes not think clearly.

Have you been angry or fearful lately because of Covid-19?

I am talking to white people here. Maybe the fear of getting Covid-19 can give you some sense of how Black people feel, when they are confronted by a police officer.

It is not irrational that Black people in America are afraid of the police, all.the.time. Black people are arrested more, disproportionately. They are killed more often, by police, too. The streets of Minneapolis, specifically in the Black neighborhoods, were on fire this week. The people who lost their local grocery stores and their pharmacies are Black. We are still in the middle of a pandemic. Who loses out? Black people. Who set the fires? The people arrested for arson are overwhelmingly from out of state.

Why are Black people in Minneapolis angry?

George Floyd died on May 25, under the knee of a policeman. He was under suspicion of passing a counterfeit $20 bill.

Less than three years ago, Philando Castile was pulled over because he looked like a suspect in a burglary, and his taillight was broken (allegedly). He was shot seven times while sitting behind the wheel. The policeman was not convicted.

Trevor Noah said it all about the 2917 interaction on video between Philando Castile and the policeman who shot him. You cannot watch it and believe the shooting was justified. Link is here.

At that time, Vox reviewed statistics on police and police killing of civilians, and the court cases that involved police and civilian killings. Black people have every right to be afraid and angry. White people and other non-Black people, we need to understand this, and to become active allies.

If it were true that  “All Lives Matter”,  the policeman would have not panicked. To this policeman, there is no “Black Lives Matter” since he was looking at every Black man to find a criminal. If Black Lives matter, he would have seen a man, not a potential criminal at that stop. He would not have shot Philando Castile. After the shooting, the officer would have been indicted for shooting a licensed gun-holder who followed the law. There are police standards for professionalism. This officer failed them. He was afraid and killed a man because of that fear. The fear has a name. It starts with R and ends with -ism.

As a bystander intervention trainer, I am in awe of Diamond Reynolds. She is the woman who watched Philando Castile — her lover and father of her child — be shot by a policeman. She remained deferential to the police. She called him “sir.” She followed police instructions. She let the police take her child from the car. She didn’t lose her temper or forget what she needed to do.

And she videoed it all. 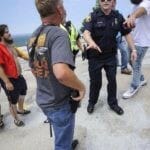 Meanwhile, Shaun King shares that not all gun licensees are created equal. He published a picture of a policeman — not holding a gun — who “talks down” a white man threatening to brandish his weapon. All, in the presence of several unarmed civilians.

Compare dead Philando Castile, who was trying to follow police directions, to this armed white guy who is threatening with a gun around police and other civilians.

The preponderance of evidence shows that police react based on their prejudices. Those prejudices are killing people. White people, we need to intervene.