To those who don’t forgive easily

I’m among those who don’t forgive easily. I don’t forget injustices. Sometimes, I let go of the anger; sometimes, it remains as a warning to not trust the person who hurt me.

My ability to forgive, when I do forgive, rests heavily on these things:

The range of people with bad intent can go from parents who disrespect their children’s growing sense of self, to policy-makers who support plans to arrest and detain homeless people in the facilities now set up for undocumented immigrants. 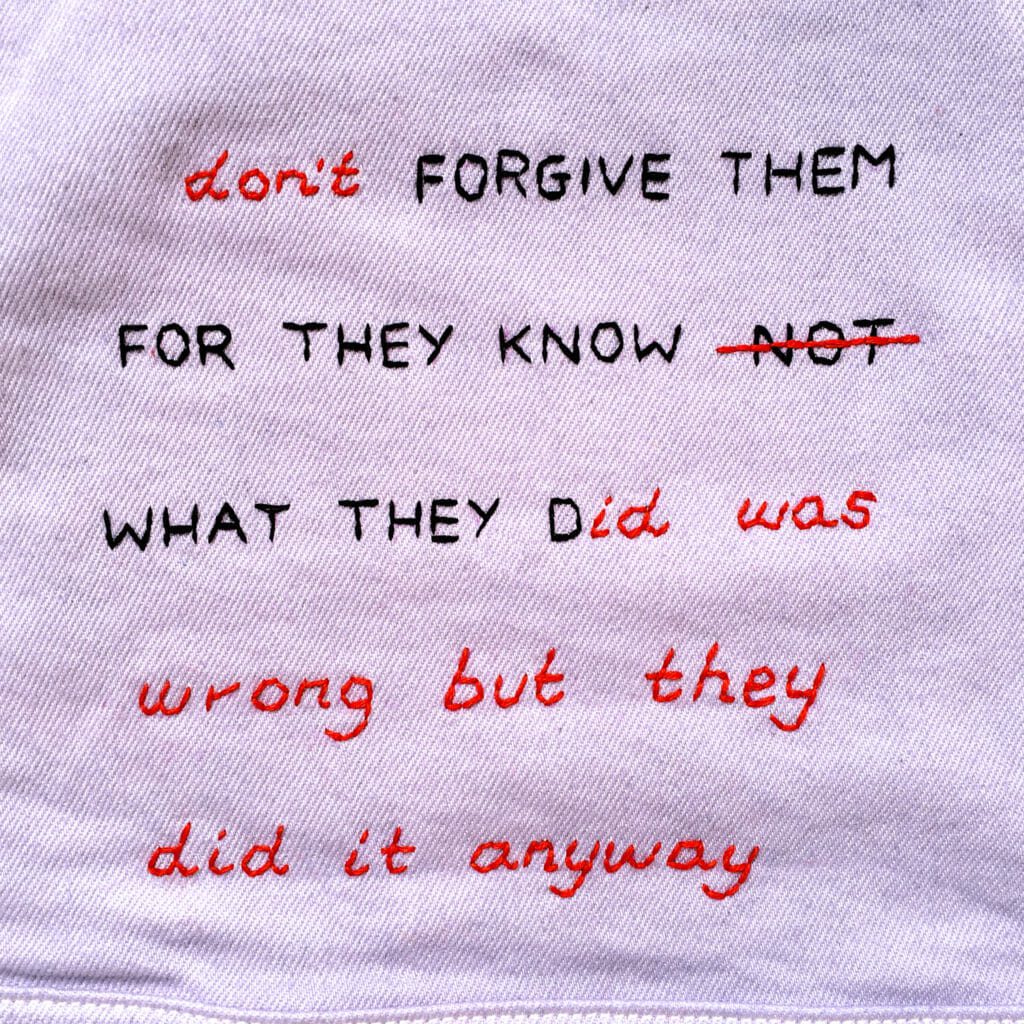 Forgiveness, in a Jewish context, is personal. At the New Year, Jews are required to search our own behavior and motives and ask others to forgive us, so that we may learn to do better. The person who was hurt is not obligated to forgive. Asking for forgiveness is a learning tool, hopefully, for both the person who did wrong and the wronged person.

In my experience, badly-intentioned people like the ones I described above do not perceive that they are doing harm, and they do not ask for forgiveness. So, why am I expected to forgive them? That is not part of my tradition.

I am not obligated to forgive my abusers. However, I am compelled to use my social power to support people more disenfranchised than I am.

My experience of Christian forgiveness has been harmful to me, as a Jewish person. Christians have told me that I must forgive in order to heal from abuse. One therapist explicitly had a goal to guide me to forgive unforgivable, unrepentant people, who were still denigrating me. Others, I think, had that goal, too, but did not tell me.

The way I understand it, forgiveness is for the healing of the harmed person, not the growth of the ill-intentioned person. Forgiveness of unrepentant wrongdoers is not part of the moral structure I grew up in, or believe in. Forgiving the unforgivable is an ideal that I do not find healing to me or the world.

America finds faith in acts of undeserved grace. When Ellen DeGeneres enjoys an afternoon with a man who worked to strip her rights, it is her obligation, as the harmed party, to be gracious. She says “be kind,” even when you disagree. She has fur-wearing friends, friends who play Christmas music in October, and other “sins.” They are still her friends, so an ex-President can be too.

She’s kind to W., who harmed Ellen and millions of other LGBTQ people during his administration. In truth, it is easy for Ellen to be gracious because she was less harmed than most, because of her wealth and privilege.

That same week, more forgiveness! Ain’t America great? A policewoman can shoot a man in his apartment, for no reason other than that she was tired and disoriented. And the dead man’s family is Christian enough to forgive her.

As Mary Katherine Backstrom says, “When marginalized people offer forgiveness and kindness, it goes viral because IT IS SHOCKING AND UNDESERVED.” That is not forgiveness. It is grace.

Sit down, my loves. We need to have a chat.

This will take about five minutes, but it’s time that we all have, or we wouldn’t be on Facebook right now.

So get comfy, cause this is gonna be uncomfy for a second. But that’s what hard truth does.

If you’ve been following me for any amount of time, you know that kindness is basically my life’s anthem.

I celebrate, encourage, and proclaim this tenant on a daily basis. It is pure, good, and WORLD CHANGING.

So this week, when two stories of incredible kindness emerged from the news, captured our collective hearts, and went gang busters viral…

In the face of all the sour news we are forced to consume on a regular basis, two stories on superhuman kindness tastes like candy.

When you share these stories (as I have) with praise hands or simply the word “THIS!”—you are missing (or willfully ignoring) the incredible weight and friction behind each image.

It is nice to imagine, isn’t it, a world in which we reconcile with “the other side” with hugs and laughter?

It’s nice to picture an America in which we step away from “our differences” and see one another as human beings, longing to be loved?

It’s beautiful, no doubt, to see people like Ellen and Brandt Jean boldly offering love to people who are utterly undeserving.

Did that word rub you the wrong way?

Okay, then. Let’s read it again:

That is the difference between kindness and grace. What these two stories have in common is a profound power disparity, and this is something being ignored by every news outlet that’s publishing these images.

Let’s be honest. Ellen’s friendship with George W Bush requires very little from the former president. She is lovable and good. She also happens to be gay.

The fact that she is able to perpetually show grace to someone who has voted to strip her of her right to work, adopt, and marry is a testament to HER CHARACTER.

It’s a testament to her ability to forgive and her ability to be gracious—and sadly, to the fact that LGBTQ persons often have to choose to live alongside and even LOVE people who, in many ways, treat them as less than human.

Please don’t get mad and close this post. If this stings, then it’s even more important for you to hear. To keep reading. To digest and pray over.

Because, my God, Brandt Jean.

He broke my brain this week with an act of grace so powerful that I still cannot fathom the richness of his faith or the strong places in his soul from which he discovered such forgiveness.

We jumped on that story like ants on a pie, didn’t we?

Because it’s something what we want SO BADLY.

A redemptive story. A reconciled world.

A place where we can forgive all wrongs and love with abandon and start over clean.

But it’s not the responsibility of black men and women to give that to us.

Not when research and facts point to unjust incarceration rates for black Americans. Not when the facts show that if a black man had pulled that trigger on a white woman eating ice cream on her own couch.

If that had happened, you know dang well that ten years and a hug would never have been a viral headline.

Was it grace? Was it kindness?

Hell yes, it was.

But we don’t get to hold it up as a standard for everyone to follow. Absolutely not.

Because that is a gross miscarriage of these message in these beautiful stories.

When marginalized people offer forgiveness and kindness, it goes viral because IT IS SHOCKING AND UNDESERVED.

When we see Ellen’s friendship with George W Bush, we are appalled because, let’s be honest, she had to overcome quite a bit of personal and political obstacles to love that man. I didn’t say he wasn’t lovable. I said Ellen is a superhuman, and she

SHOULDNT HAVE TO BE.

When Brandt Jean hugged his brothers killer, and gave her forgiveness from the bottom of his pure heart, that was shocking. Because it was undeserved. If you think his brothers murderer was OWED that grace, then you don’t understand the meaning of the word. I didn’t say what he did was wrong. I didn’t say it wasn’t good or pure.

I’m saying he SHOULDNT HAVE TO DO IT.

When we lift these stories up as standards to meet, we fail to recognize how much pain and suffering these people had to swallow to share their kindness with an undeserving recipient.

When we hail Ellen as the “righteous gay person” because she is able to accept political differences in a friend, we are nudging forward the idea that all LGBTQ people should suck it up and do the same.

Grace is a powerful thing. It is WORLD CHANGING.

But the onus shouldn’t be on the marginalized to cough up enough grace to live in peace with the rest of us.

These stories shouldn’t invoke the reactions they are getting from the rest of us.

We shouldn’t applaud and hit reshare and say “YES! The world needs more of this!”

On the contrary, my friends.

These stories should make us uncomfortable.

These stories should make us ask ourselves:

The truth is, we already know the answer.

These stories point to deep injustices that we all SO BADLY want to go away.

But let’s not demand that our marginalized friends do that work. They shouldn’t have to live this way.

If the world is going to change, that’s on the rest of us. Those of us with privilege. Those of us whose actual human rights aren’t up for argument at the Supreme Court tomorrow.

Ellen and Brandt Jean are heroes, indeed. They are super human examples kindness, love, and grace.

But they shouldn’t have to be.

And that’s my entire point, friends.

They shouldn’t have to be.