What did you learn about holding doors for other people? Your answer depends on where and when you grew up, as well as where you live now, and all the experiences in between.

“Etiquette has existed historically so people can understand how to treat people with respect,” Orr said. “And that still has a place in the world.” 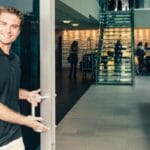 Cultural shifts in the 1960s and 1970s created some awkwardness around holding a door open for someone else, in a public place. Somehow, it became a bone of contention whether a man should hold a door open for a woman. There was a hint of over-protectiveness about the procedure that did not sit well with some more-adamant feminists.

Like some sour notes of “political correctness”, the displeasure expressed to men who held doors became its own bone of contention for men. For a while, and in some instances, people did not know if they should hold a door or not. Should men do it? Should women?

As a baby feminist, in my teens and twenties, I always made a point of holding doors open. I was subject to the occasional rude remark about my “feminist agenda” and had a man or two refuse to pass through. But mostly, the response to a door held open by a young woman was either nothing or a quick “thank you”.

I still habitually hold doors open for people, especially if they are close behind me or if they are carrying something. I make no distinction depending on the gender of the person behind me. I will wait longer holding a door for someone elderly, carrying something, or otherwise in a position to benefit from an open door. I don’t know when the act of holding a door ceased to be a “feminist agenda” and became as simple act of courtesy.

Check out the video in this blog. In it, one woman (about my age) said that a man once had a melt-down because she was holding a door open; just like my experience in the 70s. A millennial-aged guy said he might take a woman holding a door for him as flirting. Humm, I never had that experience.

This one is general:

I am sick and tired of people using “political correctness” (lack of or requests for) as an excuse to be discourteous to one another. Yes, “courtesy” comes from courtly. It is an old-fashioned term full of old-fashioned notions about class, gender, and who is worthy of what kind of respect. We are in modern times, if you are human you are worthy of courtesy and respect. It is helpful to another human being to hold the door for them, period.

This one is personal.

Recently, one of my staff gave birth to two lovely and healthy twins. They are going hither and yon with their mother. You ever try opening a door while carrying two babies in their car seats? My staff person is young and strong and as capable as a woman can be, but, give her a break! Next time you see someone carrying anything heavy, do the world a favor and open the door for them. 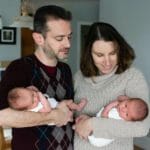 When I saw my staff person’s post, I instantly promised to amplify it. For the love of whatever values you hold dear, hold the damn door for a mother of twins carrying them both!

Hi Facebook friends, I just wanted to do a little PSA. If you see a mom/dad with a car seat, or a stroller even, trying to open a door, give them a hand. I had both kids in their car seats leaving a restaurant today and it’s hard opening a door by yourself. It’s so difficult that I didn’t even notice the rug outside the door and tripped over the lip of the rug, and went flying with both kids to the sidewalk. Thankfully they were both buckled in properly and are fine according to our pediatrician but I was traumatized thinking I’m going to kill my children with a concussion. The frustrating part was that there were several people sitting by the front door and not a single person offered to help. A couple bruises, sprained ankle and skinned knees for me that could have been avoided had one person offered to open a door. So please, consider others and if looks like they are struggling, just offer a hand!