Caution teenagers, especially Black teenagers. You are not welcome. They say it is because you are dressed in a hoodie. That is not appropriate clothing. Here’s the story. Some Black teenagers were expelled from the Wolfchase Galleria Mall in Memphis on November 3rd. The reason: they were wearing hoodies. Apparently, hoodies are considered inappropriate attire in shopping malls. The former journalist who shot the video of the arrest was also arrested there, too, that day. This is the social media telling of the incidents on November 3. Here is the video of his TV interview. Link.

Black people know they are treated differently in public spaces. Wearing hoodies is just an excuse to throw them out for being Black. However, white people either don’t know about these policies in malls or choose to ignore what they know. 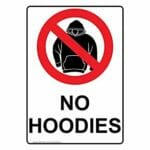 What some white allies did. What the white women did was go to the same mall, wearing hoodies. They walked around for more than a mile, passing security personnel. They flaunted their hoodie-wearing selves, taking pictures, and even sometimes putting the hoods up. When they put the hoods up, they were asked by security to take them down. It was polite; no threats of arrest. That is quite unlike the teenage Black guys who were escorted out (one in cuffs) for wearing hoodies.

Then, their story got picked up on Fox News. The takeaway: Hello white people, the hoodie-wearing policy at Wolfchase Galleria Mall is an excuse to eject Black teenagers from this public space.

Was this is a good action for allies (white women) who want to support Black teenagers?

Venue for the information.

Why would some people resent what they did?

People who commented on the white women who wore hoodies were a mixed group. Some were pleased to see the mall called-out for hypocrisy. Some thought the “experiment” was white-people nonsense. Why, the negativity?

Dealing with the negativity.

If you want to be an effective ally, plan your message carefully. Know what your goals are. In this case, the women wanted to show that hoodie-wearing was a lame excuse for throwing those teenagers out of the mall.

Some people will be negative about your use of privilege on their behalf. In that case, choose.