There is a nearly invisible line in many communities around here. Over the past twenty years, the area within this line has grown in Boston, Newton, Brookline, Cambridge, Somerville, Sharon,  Malden and some other towns in Eastern Massachusetts. Orthodox Jews buy on one side of it, whenever possible.

Is this discrimination? I don’t think so. Firstly, people choose to be on one side of it; they are not forced to be. Second, the area is large enough (now) that people do not have to pay more to buy on the preferred side.

What is the mysterious line and why is it here? 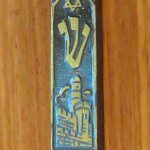 The line is called an “eruv.” It is an unbroken string that surrounds a neighborhood, town, or region to make it fall into the rules of being a “private area.”

Jewish law, when strictly enforced, prohibits carrying anything outside one’s private area on the Sabbath and on some festival days (including Rosh Hashanah and Yom Kippur.) This prohibition limits the mobility of observant Jewish people (Orthodox or not) from carrying anything outside of their private space. The eruv expands the “private space” to include everywhere within the line. Within an eruv, observant people can carry keys, canes, backpacks, and their children; outside of it, they are prohibited.

An eruv is created using mostly existing utility lines, with some additional lines added to connect them into an unbroken circle. Members of the community check the lines for damage before every Sabbath and before holidays.

It is unusual that a story about Jewish community is front and center in The Boston Globe’s real estate section (now called “Addresses.”)  I guess this is a tie-in because it is Jewish Holiday season. 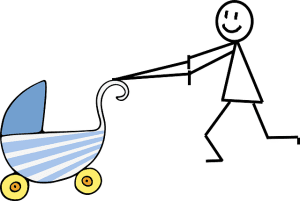 When I began in real estate, there was an eruv in Boston and Brookline and Newton. But, it was smaller. There was a price difference inside and outside the eruv. (It was more expensive to live within the eruv.)

Since the eruv is much larger now, it is less common to notice a scarcity of houses and condos within the eruv that used to drive prices up. The observant Jewish community functions as a community within a community; free to live in an area with a variety of housing at a variety of prices and still be within a big eruv.

Since most of you didn’t even know that the eruv existed, it is clear that its presence doesn’t bother anyone and is a benefit to those who want to be part of observant and Orthodox communities. As a real estate exclusive buyer’s agent, it is my job not to discriminate. My job is also to serve my clients. If someone comes to my service asking about being in the eruv, I know where the maps are online. And yes, I have been asked.