Have you stepped into a microaggression and not known it? Chances are, you have. When it happened to me, it was a success: I had earned enough trust that the receiver could call me on it.

What did I say? Paddy wagon.

Who knew, not me.

While teaching Active Bystander Intervention, I described a witnessing incident with a young African-American man and six Cambridge police. The last sentence of the story ended with “…he was unharmed when he went into the paddy wagon…” 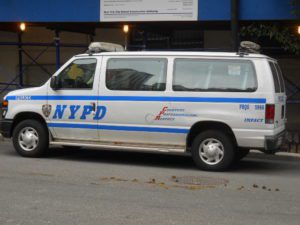 The person who heard it – loud and clear – came up to me afterward and said something like, “You used paddy wagon, do you know what it means?”

Wow! Which is true?

Neither is really right, historically. From the Urban Dictionary:

Origins of the phrase are not sinister. The origin is from the era of horse drawn box enclosed wagons employed by the Police Department, especially of New York City. These wagons had the sole identification painted on the sides, in large letters the initials P.D. When spoken the term “P.D. Wagon” easily becomes “paddy wagon”.

While the word “paddy” may be in modern use in derogatory ways, the development of those meanings are separate and unrelated to the “P. D. Wagon”.

These derogatory uses however, have led to fabricated, invented and much more complicated explanations of the phrase “paddy wagon” and while a word or phrase may develop new meanings over time, and thus become valid of themselves, that does not change the true and simple origin as a slurring of the phrase “P.D. Wagon”

According to another definition, we are both right:

A police wagon used for hauling criminals. Often due to the stereotype of Irish (Paddys= Pattys= Patricks) being arrested for public intoxication. Also due to the high number of Irish men employed as police officers during the late 19th and early 20th centuries.

When I look at “Paddy” (without the wagon), it means both the Irish person and pitching a fit of anger. Neither is respectful. When I look again at the Urban Dictionary, this is the most popular definition:

Another definition speaks to the Troubles in Ireland.

Offensive term for Irish person used by racists and bigots. Extensively used by occupying invaders as an insult or put down. Nothing to do with St. Patrick as stated elsewhere. Mick is another word usually used for the same purpose or reason. The usage of either “Mick” or “Paddy” or “Paddy-Wagon’ should not be tolerated by good minded people.

Of course, some Irish people hold the term as one of honor. As with any slur, its use inside of the group is a privilege within the group only. Not for us too unlucky to not be Irish:

All around perfect man and a sexy beast. Known to cause even the most loyal of girls to turn on their boyfriends. Talented with music, words, and kills in any sport he plays. Strong like bull. Always competitive, and ALWAYS wins what he competes in. Some consider to be on the status of not only a god, but THE God.

Note to self: “Paddy wagon” leaves my vocabulary. “Paddy” was never in it.

Thanks to Jonathan for setting me right on this!