This hasn’t changed in the 50 years since Dr. Martin Luther King, Jr. was assassinated. (April 4, 1968.) He famously said that it was moderates – the well-meaning – who were in the way:

I have almost reached the regrettable conclusion that the Negro’s great stumbling block in his stride toward freedom is not the White Citizen’s Counciler or the Ku Klux Klanner, but the white moderate, who is more devoted to “order” than to justice. [Letter from a Birmingham Jail]

In today’s language, those more devoted to order than to justice, are called “Well Meaning White Folk.” Don’t be one of them. 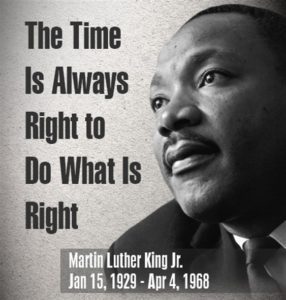 One of the things that comes up in most of my Verbal Self-Defense classes are questions about micro-aggression and how to avoid falling into harming another with micro-aggression. There’s a fear of making a mistake by saying the wrong thing.

But, mistakes can be active or passive. Failing to notice, failing to speak, failing to interrupt what you witness, are all micro-aggression (except when those actions are overt aggression.)

Ms Jiménez calls on white women, in particular, to stop supporting white men’s behavior in the face of “me, too” statements from other women.

In addition, she discusses situations where white women are sexually inappropriate in professional (and probably other!) settings. Lesbians and Black men experience non-consensual touching from white women.  In her blog about kid lit, she reports seeing white women doing these things to Black authors (in settings where he is at work to promote his book):

– Stroke biceps
– Press boobs against arms and/or shoulders while taking selfies
– Touch his hair (including braids, dreads, afros, and facial hair)
– Stroke his bald head (seriously? WTF is that about?)
– Sidle up as he’s talking to a small group of people, and move a hand across his lower back/upper butt region
– Touch his butt

If white women feel safe to touch Black men without consent, it is behavior that is an assertion of power based on racism. These women support the status quo of racism by taking liberties with Black men. If a “nice” woman observing this says and does nothing, she is being Well Meaning White Folk. Passive micro-aggression, at best. At worst…

What could you do? How much order would you disrupt for justice?