Rona’s rule #1: If you want to communicate with people, stop calling them stupid.

Don’t take a good argument and defeat it by calling anyone who disagrees stupid. That just makes people return to their corner: you are the elitist, they are the real Americans.

The good argument: Chick-fil-A spent over two million dollars of their profits to fight against marriage equality. People who eat there enabled that lobbying.

How it is defeated: Dollurs, yur…

Look at this billboard. “Over 2 million dollurs of our profit has been used to stop marriage equality. Thanx for yur support! Enjoy yur waffle fries.” 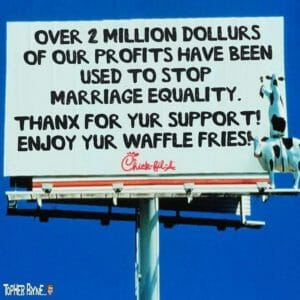 No one who reads this billboard would see this as normal language. It’s a mishmash of what some would call elite speech and others would call ignorant. No one who supports the position that Chick-Fil-A holds on marriage would use the words “marriage equality”; they would say “same-sex marriage” or something more derogatory. The sign intentionally misspells to show a countrified accent (dollurs, yur) and pokes fun at people who like their signature side dish (waffle fries).

What a waste of money.

Rule #2: Don’t count on people to act in their own interests, whether they are stupid or smart.

My second example of the day is the on-line comments I saw about Walmart and the conservative boycott called last week over the Impeach 45 t-shirt.

The comments that I saw harped on how Walmart will never be boycotted from the conservatives. It is not in conservative’s interests to harm this company. The comments implied that getting cheap goods is most important to the ($&*#@^) Trump lovers, who are dopes and low-lifes. They couldn’t buy their cheap, imported goods without these stores. I saw lots of that sort of thing. It’s another example of working-class bashing that gives liberals a bad name. 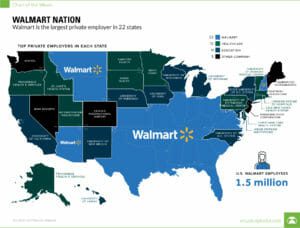 I will go one step further. Walmart is a major employer in typically Republican states. So, boycotting Walmart is aiming at the local economy. It is against their interest, big-time, to harm this company. But, there was a boycott threatened, it went viral, and the t-shirt was gone.

Rule #3: You might not know what the strategy really is.

Were the conservatives going against their own interests? Are they stupid? No and no. This is not the first t-shirt that Walmart has pulled from its on-line store. So the action against the Impeach 45 t-shirt did not have to be very extensive to get the shirt removed. The boycott callers knew that Walmart has no qualms about cutting out a product that causes them problems. Walmart has not cut ties with the company that makes the t-shirts; that company makes products stating both conservative and liberal memes. If the conservatives were really ready to boycott Walmart, they’d have done it and asked for more concessions to their opinion.