Boston Police set this up. White Rights advocates, posing as Free Speech advocates to have their say with a barrier between them and any counter-protesters. The barrier was to protect those free White Rights speakers from people who don’t agree with Americans advocating for oppression/slavery/genocide. 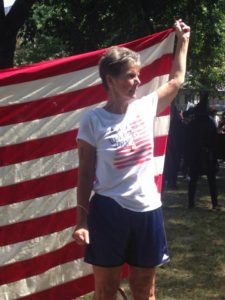 My story involves this woman. The Boston police protected her and broke up arguments she started all day long. All.day.long.

However, the rules of engagement created by the Boston Police were designed to keep the opposing sides separate. I have my doubts that a black or brown person would be protected by police if they walked into a crowd of 20,000 “Make America Great” supporters and started insulting them.

She was not spouting hate speech. She was jingoistic and hateful. There is a difference. I first saw her at about 11:15 at the State House. There, she was shouting the virtues of Trump’s America and calling us things like “scum” and “low-lifes.” She went so far as to say the Donald Trump will rid the country of scum like us. She took up a position at the top of the steps next to the 54th Massachusetts Volunteer Infantry Statue. 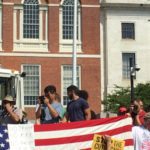 How did the crowd react?

They covered the flag with anti-hate signs. She was over-shouted by the crowd. Then, the marshals blocked the stairs for everyone. She moved into the crowd. There, her insults continued.

Sometime later (I wasn’t paying attention to the time), a chant rose “bye-bye fascist.” I looked to see people surrounding this woman and walking her out of the very congested area near the State House counter-rally speaker’s area. 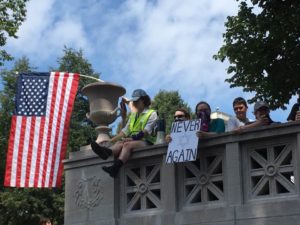 The “Make America Great” folks do not own the American flag. People in the counter-protest are also Americans. It is our flag. We do not hate the flag.

The only flag burned at this rally was a Confederate flag, which is the flag of a defeated rebel army that waged war against the American flag in the 1860s. That Confederate flag is the banner of people who want to see the continuation of subjugation of non-white people in America.

My experience with the American flag lady

I saw her next on the common. We set up our group under a tree as a “home base.” She came up behind us. There, we had a direct confrontation.

We were called choice names, such as scum, low-life, leech, communist. We were told that Donald Trump will rid this land of low-lifes like us. According to her, we don’t know what it is like to have to work and pay taxes.

She continued to shout her praise for what Donald Trump was going to do for America. Frankly, at this point she sounded like she was going through a script she didn’t quite understand. It got a bit disjointed and annoying.

We sang “This Land is Your Land”, and “America.” I made eye contact with her and shouted the word “brotherhood” during the song. There is a video of our song moment somewhere on Twitter. I haven’t seen it. Neither has Fox News. 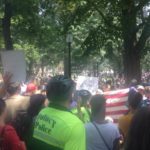 She moved on to yell at other counter-protesters. The police eventually broke that one up.

She’s now pretty famous, because Fox News made her day-long quest to prove someone treated her badly into a national moment. She failed. So did Fox.

Watch her “famous video clip” (link) for yourself. Remember that she is calling every one of those counter-protest marchers some sort of name. The most common I heard from her lips was “scum” or “lowlife.”

This is what I see in the video:

Someone punched at the American flag, probably trying to get her to drop it. She ran after him. She tripped on her flag. That was the most violent moment of her day.

Meanwhile, 20,000 people marched and gathered. There was no vandalism. Thirty three people were arrested. I saw no public drunkenness. I smelled weed once.

Now, some words about Free Speech.

The American Constitution has an amendment that covers free speech. It is number one. This is what is says about speech:

Amendment I. Congress shall make no law respecting an establishment of religion, or prohibiting the  exercise thereof; or abridging the freedom of speech, or of the press; or the right of the people peaceably to assemble, and to petition the government for a redress of grievances.

Congress will not create laws stopping people from speaking their minds or printing it.

Kid’s Law explains it this way:

Freedom of speech: The First Amendment of the United States Constitution stops the government from making any laws that may stop us from saying what we feel or think. The American people have the right to share their opinions with other people or criticize the government.

People may not use words to start a fight nor threaten to kill someone, nor encourage someone else to kill another person; these types of speech incite criminal behavior and are against the law. There is complicated case law about whether derogatory speech against a group of people can be considered inciting criminal behavior. Here’s a link to details.

From what I saw, in about an hour’s worth of watching the woman with her American flag, she was using “fighting words” and making her best effort to get someone to fight. Out of the 20,000 of us, the best she got was one person hitting the flag to knock it from her grasp.