Racism isn’t some other city’s problem.

Rep. Russell Holmes was quoted in The Banner this month about a double murder of two Black men in Winthrop and the knife assault of a Jewish man in Brighton. Both assailants chose their targets based on race/religion.

“It’s clear that this undercurrent isn’t just happening in Republican states,” he said. “Folks are being radicalized online. Clearly, we should all be worried.”

It is a mistake for white people in the Northeast to think that racism is a problem in the South or in “red” states, and not here. There have always been racists and anti-Semites in Boston (as long as there were Blacks and Jews here).

When people write about racism in Boston, they often start with busing boycotts of the 1970s. Those were ugly, not the “polite” racism that the Northeast is known for.

Boston was the home of many fans of racist/antisemitic priest Charles Coughlin. Nazi groups were active here as Nazis rose to power in Europe. Similar to how Black youth are sometimes treated by police now, in 1943, two Jewish teenagers were beaten by an Irish mob, arrested, then beaten by the police, charged and fined. This is institutional antisemitism, much like current police racism. After World War II, Jews faced less of that kind of overt violence here. However, Jewish neighborhoods were economically harmed by redlining (on Blue Hill Avenue) and urban renewal (in the West End).

There is a new wave  of racism happening, and it didn’t start this spring.

In 2017, there was a publicized racial incident at Fenway Park. Boston Red Sox fans, apparently, are well-known by Black ballplayers for their foul, racist comments. I was interviewed about that 2017 incident. The story was about what a parent should do, if they witness racial language when they are in public with their children. 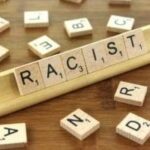 Also in 2017 Boston has a chance to look this problem in the eye. The Boston Globe Spotlight team is doing the journalism that I am not equipped to do. I trust their journalistic standards, and I think you should, too.

In the very first article, Akilah Johnson answers the question, “Is Boston America’s most racist city?” In a national survey, Black people considered Boston the most unwelcoming city of eight cities surveyed. Boston results were 54 percent found Boston to be unwelcoming. Second was Charlotte, which 38 percent considered unwelcoming.

I encourage you to read about your home town. Have you noticed just how white it is?

Non-subscribers can read this for free at this link.

Subscribers, find the links here. Series intro page, with links to all the articles.