Pop quiz 1: There is a person using a screw driver to change the license plates on a car. From a distance, the person looks like an African American teenager, wearing casual clothes. What do you do?

Here’s what happened to Tonya Jameson. A middle class, professional woman who bought a used SUV. Ms. Jameson is Black. 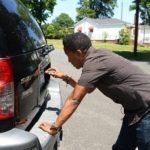 In recent weeks, I’ve seen this Google Doc a few times. It’s about abolishing policing in America. When I first read it, I thought, “Wow, that’s radical.” The more I sat with it, the more it made sense to me. But, I have privilege as a basically white person. I have privilege as a homeowner, as someone who knows my elected officials (and they know me), as someone who is known in the community. Is that where my objections come from?