Everyone interviewed in this article has an opinion about who is causing harm in America. Everyone feels that Americans have the right to protest. What they disagree about is what is going wrong in America, and what protests are legitimate. (They all vote.)

Protesting is a right

Bridgette Craighead is a hairdresser in Rocky Mount, Virginia. She led Black Lives Matter rallies last summer. It was daunting how her life changed in six months. In the summer, she danced and was supported by local police: specifically, two officers later arrested for participating in the Insurrection on January 6. By the winter of 2021, her business was under siege and she was being harassed.

How can police who supported peaceful BLM protests also support armed militia and threatening Congress at the Capitol? It’s about the right to free speech they say. There is a point of agreement in Rocky Mount – protest is an American’s right.

Voting is a right, too. It shows the will of the people–as long as the results are what you wanted.

This same town had a controversy over removing a Confederate statue. They left it to popular vote. That had a foreordained conclusion, since the town is 80% white. The monument stays.

This county went overwhelmingly for Donald Trump last November. Some here went to Washington on January 6. Some of those folk knew that the national electorate legally chose Joe Biden.

What protest is legitimate? 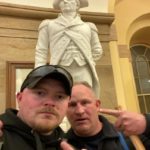 Now-fired officer Jacob Fracker danced at the BLM rally. He is a combat veteran. He lost his job after participating in the mob that entered the Capitol Building on January 6. 2021. He sees no contradiction in being civil and supportive to BLM protest leaders and also joining a mob that rioted at the Capitol.

Also in Rocky Mount, Aaron Hodges formed an armed militia. Some of those men went to Washington on January 6. He also believes he is within his right to protest in this manner.

Calling a militia muster in Virginia:

“Just stand up for yourself,” Aaron Hodges said. “Say no. Not just to the government taking your rights or property. But to anyone who tries to take advantage of you.”

What is wrong with America?

Aaron Hodges talked about his sense of loss. The old America “that is honor-bound and that had chivalry” is completely gone, he said. Families have fallen apart — white and Black. Now the country is just a lot of disconnected people who are bored and lonely and obsessed with being entertained, he said, and the political class, which he saw as one big scheming mass, is profiting from it. He found that depressing.

Was there election fraud? Yes, he said. Was the election stolen? At this point, he does not think so, but he is not sure. One thing is clear, he said: The conflict is not left versus right, or white versus Black, but of the political class versus ordinary Americans.

“Who keeps America together?” he said. “Lower-class Americans. We are trying to make a future and keep our home stuff together. The elites, they have nothing better to do. So, they want to rip it apart.” [source]

Ms. Penny Blue is an African American woman who returned to Rocky Mount after about 25 years away.

The way she sees it, the basic struggle has always been about power, and for generations, the majority-white county, helped by a twisted version of history, has been extremely successful in preserving it.

Black people make up about 8 percent of the county and 20 percent of the town of Rocky Mount, yet very few Black residents have ever been elected to public office. The Rocky Mount Police Department has never had a Black chief.

“They all say, ‘You know, Franklin County is different,’” she said. “‘We got good families here, everybody likes everybody.’ Well, the people in power are satisfied. The rest of us are not satisfied. They’re just not used to anybody speaking up and saying anything.”

But many in the county fervently believe that the election was stolen. Ms. [Penny] Blue sees that as another Lost Cause narrative [like saying that the Civil War was about state’s rights against the Federal government]. White people, she said, are mourning more than just an election. They believe they are losing the right to determine what version of America is out there in the world. And that, she said, has never gone well for Black people in Franklin County.

“History tells me we are in a very dangerous time,” she said. [source]

Who is the enemy of a just America?

If you ask Officers Fracker or Robertson or militia leader Hodges, the problem with America is the political elite. In other words, rich people, elected officials, and people with political power. The lives of working class people are ignored.

If you ask Black women, like Bridgette Craighead or Penny Blue, the problem is that working- class white people are holding onto an America that never really was. They are nostalgic for an ideal we never obtained. With their mourning this loss, Black people get the short portion of society’s bounty.

What do all these unhappy people have in common?

Protest. Both groups protested this year. One group was violent.

Yet, moving forward, Bridgette Craighead is running for elected office. A Black woman, Bernice Cobbs, was appointed county School Superintendent. (She is a long-time administrator in the district, having been a Principal and Vice Principal). So, Black people are taking their places in local positions of power.

This article makes me sad.