Some parents who work essential jobs, such as emergency room doctors, had to find childcare in a hurry this March. Suddenly, daycare centers and schools were shuttered. It was dangerous for children to be together and then to go home to their families every afternoon. Working parents, the ones who had the means, adapted.

As parents returned to work this summer, some day cares opened, and school openings were being planned. Work-from-home parents and unemployed parents had more time to consider options. What to do about schooling is a hot topic among professional parents this summer.

But for other parents, the pandemic brought no change to their childcare routine for their pre-schoolers. Many had after-school care for their school-aged kids that was not disrupted. These parents were working, but were not earning enough to send their children to professional childcare. They could never afford it.

Have you thought about who takes care of the grocery store clerk’s children? It’s not paid childcare–not for $15 an hour or (much) more. Extended families, by blood or affinity, do childcare for people who get paid about the same or even less than childcare workers.

The hardest-hit towns in Massachusetts for Covid-19 infection were towns with many essential workers in them. This is where grocery workers, delivery people, and those who are essential, but not well-paid, live. When childcare businesses closed, it didn’t affect people whose children went to Millie down the street when Mommy went to work. The disruption came when someone brought Covid-19 into that extended family.

The higher rates of infection in moderate and low income towns continued in Massachusetts into the summer. Many of these towns have been on the top of this list for highest infection rates throughout the pandemic.

Among cities and towns with at least 15 new cases [during the last two weeks of July], these 25 communities have the highest percentages of positive cases in that time period:

Schools are not equal

American public schools are funded in part by Federal and State funds. However, they are heavily funded by municipal taxes that are not at all equal. Affluent people are attracted to “good schools,” and less affluent people cannot afford these “good schools.” At least, as far as home buyers are concerned, they continue to pay more and more to be in the districts that claim to have good schools.

The correlation of scores with socioeconomic status is also demonstrated within Massachusetts.  This chart shows the child poverty rate in the 10 districts with the highest MCAS scores (on the left), and those with the lowest. 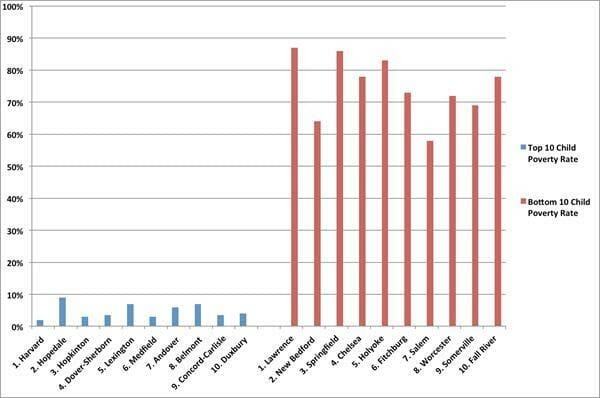 Paul Reville, former Secretary of Education for Massachusetts, wrote in Education Week in June 2013: “We were going to eliminate the correlation between zip codes and educational achievement and attainment. I’m sorry to say that, two decades later, it is clear that we’ve failed.”

My state Senator, Pat Jehlen, recently published a newsletter about the minimum wage and education. The chart above was developed by her staff.

Since March, schools have been online. This has disadvantaged many children. These problems are showing up in every school environment.

Add to that, the inequities affecting low-income school districts and children in low-income families.

How much will children fall behind, if the pandemic affects school all the way through the 2020-2021 school year?