While listening to On the Media, I heard a civil and sensible discussion about why segregated housing should be a right of Americans.

Bob Garfield interviewed Jared Taylor. Mr. Taylor considers himself a race realist. He believes that the races are driven, by nature, to segregate. The part of the conversation about housing went like this:

Jared Taylor: The ultimate goal is to have at least a portion of the United States where Whites are the recognized majority and their culture recognized as the dominant culture and where they can live free from the embrace of people unlike themselves. And I believe that can be achieved through voluntary separation. The government today is doing its best to try to force people together…

Bob Garfield: I can tell you, explicitly, that the law says you do not get to have a say in where other people live.

Jared Taylor: Of course not.

Throughout my adult life Fair Housing has been the law of the land. There was a long history of segregated — and not equal — housing opportunity in America. Here is a quick summary.

Over time, major court cases and laws enforced the right of anyone to live where they can afford to live, free of discrimination based on who they are. Practices that kept certain groups within certain neighborhoods were outlawed. These tactics, which are now illegal, were used to keep neighborhoods segregated: 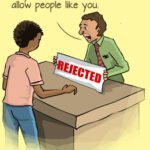 Who were affected by housing discrimination?

Housing discrimination against African Americans got a lot of attention, initially. Over the years, other groups of people who were also vulnerable to discrimination were identified.

Under federal and state law, it is illegal to discriminate in housing based on:

Under Massachusetts law, it is illegal to discriminate in housing based on:

Can the desire of some White Americans to live “free from the embrace of people unlike themselves” be achieved without harming the housing opportunities of the rest of us? Of course not. The freedom to live away from other people — by definition — reserves the right to deny another person the right to live in specific places. In our county, we have the right to live anywhere we can pay for; that is the current law, with very few exceptions. (Like senior-only housing.)

This conversation will be part of the cultural-political climate of our country in the years to come. As a buyer’s agent, a citizen, a woman, and a Jew, I know where I stand. What about you?