Success brings out the haters. Sexism is a specific hate that women get, that Xyla Foxlin, founder of Parihug, suffered through. She rose above. Here’s her story.

When she was a teenager, boys in her robotics club broke into her bedroom and posed in her bed in sexually explicit ways. She was so innocent at the time that she took advice to let it slide.

Later, she was directly rejected at her summer job, which was in private plane maintenance. Some pilots would not let a girl fuel their planes. (Apparently, aviation is a very sexist profession.)

Then, while she was in college, her success drew a Twitter stalker who threatened her and caused her to have to leave her home.

Before Twitter, this type of harassment was well known and just as dangerous. One version was graffiti on a bathroom wall that says “For a good time, call Linda. [phone number here.]” Now it is: (source for photo.) 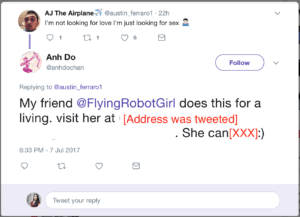 This has a happy ending.

Normal channels at Twitter were unresponsive and useless in stopping Ms. Foxlin’s harassment. However, because of networks of women engineers, Ms. Foxlin was able to get the ear of a professional woman at Twitter. That woman stopped the harassment and led to the identification of the assailant.

Is it sexism if a woman did it?

The real question is why would a woman do this to another woman? That answer is internalized sexism.

Woman have been economically disadvantaged in American culture. We still earn less than men doing the same job with the same credentials. Our careers are interrupted more by household responsibilities and parenting than our male peers. Some women succeed anyway.

The woman who attacked Ms. Foxlin felt a sense of scarcity; there are too few places for successful women. Ms. Foxlin’s success, in the eyes of her attacker, usurped the “successful woman’s spot” that the assailant coveted. That plays right into woman-on-woman sexism.

Think back to about a year ago, when a woman was running for President. Think about how criticism of her — and of the other successful political women – too often focuses on beauty and sexuality. If she is pretty, she is using that; she must be stupid (example: the Vice Presidential candidate of 2012). If she is not pretty, those insults go on and on: she’s fat, she’s showing cleavage, she is dressing frumpy, she wears too much make-up, she wears too little make-up, she is too prissy-femmie, she is too manly, she is too young, she is too old…she is too attractive (and therefore a slut) or is unattractive (and therefore unworthy).  In short, she is not a guy.

As long as woman think there is not enough room for qualified women to succeed, there will be undue jealousy. Some of that will boil over into using sexist tactics against one another.

I see Xyla Foxlin as a role model. She was put through hell by this experience. Yet the lesson she learned from it is that professional women (and the men who are allies) can succeed together.

The culture of dominance and aggression towards women is so pervasive that even competent, self-empowered women can be drawn into the trap of attacking each other for their accomplishments. My anonymous Twitter critic isn’t my enemy here — the real enemy is a culture that forces us into competition with one another and conditions us to believe that one woman’s achievement is another’s failure, a culture that normalizes scrutinizing a woman’s sexuality over her work. The truth is that we all rise or we all fall together; infighting will only make us lose sight of what’s important. [emphasis hers]

I see Xyla Foxlin as a leader. She is choosing to lead professional women in the direction of coalition. In support, here is her call to action:

If you read this and felt moved enough to do something, here are a few suggestions near and dear to my heart. If you can, support the National Center for Women in Information Technology (NCWIT) by either adding them as your Amazon Smile recipient or visiting www.ncwit.org, and be sure to encourage any high-school aged women in your life to apply. NCWIT has been one of the most supportive and influential networks of my career.

If you are an accredited investor, put your money where it matters! If you don’t have the confidence or expertise to invest in individual companies, invest in funds that do a good job of maintaining a diverse portfolio. I’m of course biased towards Flashstarts of Cleveland — my first investors and the one in Ohio willing to take the risk on my crazy idea. Not only that, but their investing team is majority female and I graduated in their accelerator class with four female founders, one black male founder, and one white male founder. They take incredible care of their founders — even offering to safely house me when the Twitter harasser published my address encouraging strangers to rape the girl living there. Other funds (older and larger) that I’m a big fan of are 1517 (this is their Medium account) and Drummond Road Capital — also based here in Cleveland. Both have women on the investing teams and diverse portfolios.