How do you avoid complicity in horrendous actions? By speaking up.

President Joe Biden and his speech writers are hitting on points that I teach in verbal self-defense and bystander intervention. In his speech in Buffalo last week, he used the technique of naming the behavior.  He used his authority for the greater good. He recruited allies.

The President named the attack in Buffalo:

He specifically called the narrative of “replacement” false and unAmerican.

From his position as President, Joe Biden’s words have power. He said: “This has no place in America.”

He called for a ban on assault weapons. (He also called them “weapons of war used in a supermarket,”)

He called for action to address how the internet recruits terrorists, giving hate and fear too much oxygen. He called out white supremacists and people who care only for profit as the spreaders of hate messages on the internet. He identified them as a minority in America.

He asked the audience to speak up and reject white supremacy. We cannot allow a hateful minority to distort America. His audience – the one he is trying to recruit – are not the grieving people in Buffalo. They are the white, Christian, straight… people who are viewing this speech all over the country.

He quoted the slogan “Silence equals complicity.” This is a rallying cry. It is well known that only about a third of the German people supported Hitler, another third didn’t speak up. We know what happens when that third is silent.

You’re not the President, so what can you do?

There are many alternatives to silent complicity. The simplest of them is to say you disagree, without detail.

Why do you need to speak out? This is the recruiting allies part.

It is critically important that people in your spaces know that someone else knows that something is obviously false.  Your speaking up, or your silence, makes a difference to everyone in the room. 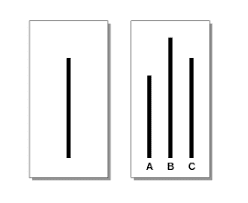 Social psychologist Solomon Asch showed that people will agree with something that they know is not true, if they are socially pressured into it. In his 1951 experiment, test subjects were asked which lines were the same length. When the subjects heard the other participants giving the same wrong answer, about a third of them agreed with the obviously wrong answer. Only 25% stuck to their truths, under social pressure, for the entire experiment.

Apparently, people conform for two main reasons: because they want to fit in with the group (normative influence) and because they believe the group is better informed than they are (informational influence). [source]

Please, do your best not to succumb to peer pressure. Don’t avoid standing your ground for fear that others are better informed. You know what you know. Say so!

One Response to "Silence equals complicity"