“Would you like a straw?” asked our waitress. Such a simple question. There was nothing in her tone that said either, “Straws are evil” or “Granola-types don’t want straws anymore.”

Why do we expect a straw? Because, having a plastic straw has become the norm in casual restaurants. It’s become a cultural habit. It starts with a convenience, like single-use plastic grocery bags, single-serving bottled water,  or wheels on suitcases… These things seem like good ideas. Then the innovation becomes something consumers expect. Some of these are better than others. Single-use plastic stuff has become a big pollution source. Wheels on suitcases, not so much.

Disposable, single-use straws have become a standard feature on many restaurant tables. Kids love them. Many grown-up kids do, too. The animals in the oceans hate them.

I don’t like straws. I find it easier to drink from the edge of the cup.

Since I saw a video about what straws are doing to marine life, (warning: it’s pretty graphic.)

I have been avoiding them in restaurants. When I ask for “no straw, please,” I have been greeted with an eye-roll, I have gotten a straw anyway, and, the worst was when I got a straw separate from my drink – but with the wrapper opened. 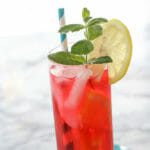 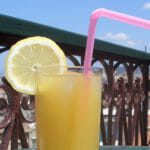 Paper straws get mushy after a while, but they don’t need to be ugly. Plastic straws cost too much, for the oceans.

Around Boston, some restaurants, bars, and consumers are finding alternatives. The simplest one for restaurants is the one that I encountered: just ask.  Some restaurants are only giving straws to people who actively want them. Others report that they use paper straws now or sell metal ones. One bar uses what they call a vampire glass (with a built-in straw to suck from.)  Consumers can carry their own reusable straw. Someone even made a retractable one for your keychain.

Cultural habits, like expecting a straw with any cold drink, developed over time. It will take time for people to get used to not using a straw for every drink.  I couldn’t find statistics for America, but in England, a ban on single-use bags with a charge for consumers to purchase bags reduced plastic bag use by 85 percent. As American cities and towns sign onto laws like this, American use of single-use bags are going down, too

Can you promise me to request your next drink without a straw?

One Response to "Single-Use Plastic"