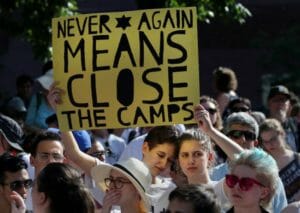 In the past few weeks, there was a wave of national protests against the camps on our southern border. A Congressional delegation visited and reported on these camps. As a result, a deeper line is being drawn about who is American.

The President told four members of Congress — three of whom are American-born and the other a naturalized American citizen – to “go back where they came from.” He then insulted the countries he thought they came from. All these women are not-white.

Some people stand with the President and think these members of Congress should “love America or leave it.” Others see the President’s remark as racist. People on both sides of this divide see the other side as brainwashed or somehow deluded. Derision flew on social media.

How does this taking sides happen?

One explanation comes out of social psychology. Here’s a podcast with a longer explanation.

Sociologists call this Pluralistic Ignorance. It happens when a group of people believe something and demand conformity to that belief within a social setting.

Here’s a benign example: The social norm at a professional conference is an assumption that everyone knows about the subject of the conference. If the speaker stops and asks if everyone understands, everyone nods “yes.” You hesitate to ask a question at a conference, for fear that everyone else understands the material and you will show yourself as less informed than the others. Because you don’t ask the question, you benefit less from the conference. (Have you done that?)

A higher stakes example: peer pressure in colleges leads to the idea that binge drinking is cool. You don’t want to be “uncool.” This could lead to you, or someone at your party, overdosing on alcohol. This, or something like this, is familiar to you, too, right? Have you eaten too much, or drank too much, or stayed out too late, to avoid seeming wimpy around your friends?

Extreme examples are cults, where peer pressure leads to self-destructive behavior in loyalty to the cult leader. The example that social scientists have studied extensively is the cult led by Jim Jones. That cult did a mass suicide, where seven hundred people first killed three hundred children, then themselves. They also left a recorded archive.

Peer pressure is pretty powerful; social scientist, Solomon Asch demonstrated that people will go along with an obviously wrong answer, if everyone else in a group says it is so. In his famous study, 37 out of 50 people said a line was equal length to another line, when their own eyes said it was not.

People go along to get along. No one wants to be left out or to be asked to leave. People are reluctant to be the first person to speak for the opposite opinion. The next step, enforcement, is when someone tries to convince another person to go along with something that the enforcer doesn’t want to do, either.

Were you ever one of the people who teased or cajoled a friend to eat more, drink more, or stay out later when you really didn’t want to be doing it yourself?

How the Norm Against Segregation in America was Established

People enforce social norms. So does the government.

During the civil rights era, American society was deeply divided. There were large protests, both non-violent and rioting. The goal was the end of overt racial segregation in America and voting rights for African Americans as a means of political enfranchisement.

The more divided America became, the higher the cost for speaking out. Families and friends argued about this. Some stopped communicating.

Some people thought protests proved that Blacks were asking for too much. It had to be stopped; this would lead to a mixing of racial groups, and it would destroy America.

Some people were morally committed to stopping it, some committed violent acts to maintain segregation. Civil rights protests continued, and they were met with escalating violence from civilians and government agencies, like police. People were beaten and jailed and killed during both non-violent and violent protests. Imprisonment, and much of the beating, was at the hands of police. To people who supported segregation, violent confrontations proved that Black people were the threat to society.

Other people thought American principles of all people created equal applied to non-white people too. They saw the increasing violence during the civil rights era as an abuse of individual and government power. Some of these people protested violently, and non-violently, in support of civil rights.

The protests, and how they changed public opinion, caused the government to support the end of segregation. Overt segregation – those “whites only” bathrooms and water fountains – went away. It became illegal to overtly discriminate against non-white people in housing, education, and employment.

Among an increasing number of white Americans, it then became socially awkward to speak openly about wanting to keep Black people away from white people. This was now illegal. Nationally, it became “impolite” or “impolitic” to be an overt racist. But, the belief that non-white people would ruin America did not go away – it remained a conversation within groups who agreed or who were reluctant to disagree, and had enforcers to support segregationist ideas.

Segregationists, within their social spheres, could talk about what they “knew”: the country was going in the wrong direction. Things they opposed were happening: Mixed-race marriage, mixed-race children, and non-white students at elite colleges, in good jobs, in nice houses…a mixed-race President. They supported politicians who worked against anything that benefited Black people (and by extension, immigrants, Latinos, later Muslims, and sometimes Jews).

The same strategy that makes people reluctant to admit they don’t understand a speaker at a conference made segregationists reluctant to publicly say that they thought non-white people should not be around white people. Just like the conference-goer doesn’t want to be seen as not professionally competent, segregationists don’t want to be seen as racist. “Racist” is associated with ignorance and low-class, as is “redneck”, so when civil rights supporters talk about racists and rednecks, it is insulting.

Get it? (Don’t just nod “yes” because you are supposed to.)

Next week: how to use peer pressure to make segregation taboo again.