I attended and led some diversity trainings within the Jewish community in 2021. White Jews of Ashkenazi descent (ancestors coming from northern and eastern Europe) had huge blind spots about who their fellow congregants are and whether their community welcomed all Jews. Although I shouldn’t have been surprised, I was. The white European-heritage majority thinks it is welcoming, but frequently is not. 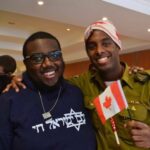 I was reminded of that by an article in The Forward from a Black Jewish educator, Tyler Samuels. It’s a short read, so please look at it.

Tyler Samuels mentions things that white Jews have said to him, how he’s been gaslighted by fellow Jews, and how much he resents Jewish pushback on discussing diversity within Jewish communities because it runs contrary to Jewish solidarity against antisemitism.

Jewish America is majority white (except to haters who think we are our own race). In America, we are majority European background. We have a few big cultural divisions, including Ashkenazi Jews, from northern and eastern Europe and Sephardi Jews from cultural roots in 10th-14th century Spain and Portugal.

When I was growing up, any Jew who was not from northern/eastern European culture was “Sephardi.” This dismissed the cultural history of the Jews who now use the term “Mizrahi.” These Jews have a cultural history based in the Middle East and central Asia; they or their cultural ancestors lived in Muslim majority cultures throughout what was the Persian, Babylonian, and Ottoman Empires.

When Ashkenazi Jews remain oblivious to cultural norms of Sephardi and Mizrahi Jews, they are assuming that Ashkenazi Judaism is the only Judaism in their community. They assume a melting pot where people with different backgrounds will assimilate to that norm.

In America: “This is a Christian country, get used to it.”

In Jewish America: “This is an Ashkenazi Jewish community, get used to it.”

We can do better.

Microaggression in Jewish environments, an example:

So, how does this play out? Here are some comments I hear, far too often, in Jewish circles:“That’s not a Jewish name.” “What kind of Jewish name is that?”

A Jewish name is one used by a Jewish person.\

When Americans think of Jewish names, most people mention Ashkenazi surnames. What’s an Ashkenazi Jewish surname? Schwartz, Bloomberg, Rosen, Stern, Shapiro, Goldblatt… These names reflect German and Russian influence on the Jewish communities that came from those parts of Europe.

Common Sephardi names are not recognized as Jewish. They sound Spanish or Portuguese and include Rodrigues, Nunes, Mendes, Lopes, Miranda, Gomes and others.

Mizrahi names reflect majority Muslim cultures of the Middle East and central Asia. They sound Arabic, or Hebrew, or Persian, or just different. Just like Ashkenazi Jewish names picked up German and Russian styles of naming, so did Mizrahi Jewish names pick up the common languages where they lived.

Then there are the converts. When someone converts to Judaism, they receive a “Hebrew name” for ritual purposes, but their legal names do not need to change. Jewish custom holds that once a person converts, they are part of the community, and the conversion is not mentioned again. However, if someone has a culturally Christian name, the name is a tell. If an adult male converts, the name may be passed down for generations. Children born and raised Jewish with a parent, grandparent or great-grandparent with a Christian-sounding name face the question “What kind of Jewish name is that?” more often than they should (they should never).

Now notice that I just wrote almost 600+ words on diversity without touching on how Jews of color, those with special needs, gender nonconforming, and other people might feel excluded by the white Ashkenazi melting pot. Now, read about how the narrow idea of what is Jewish is hurting the American Jewish community.