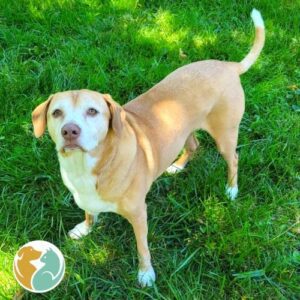 Family circumstance led me into a land where I have never been before. That’s the world of dog lovers. When my brother-in-law, Joel Fischman, died suddenly, his much-beloved dog, Susie, was left orphaned in his apartment in Toledo, Ohio.

I took that task of finding Susie a new home. Thus, I walked into the world of dog lovers.

Who lives in the World of Dog Lovers?

My brother-in-law died unexpectedly in Ohio. He moved there only about a year ago. His best friends and long-term friends live near Washington, DC. No one knew how to find a friend in Ohio to take Susie in, so a dog boarding professional was hired to keep her safe. Quick thinking by a family friend got Susie boarded at her doggie daycare for two weeks.

I started looking for resources to safely rehouse Susie before Joel was buried. My moral and religious training tells me that the labor I do for people who are dead is especially important; I do it without any expectation of the favor being returned by the dead person. I felt like caring for Susie was caring for Joel. I had no idea how deeply emotional this was going to be.

Local dog lovers: My immediate thoughts were to seek out people who fostered dogs here in Massachusetts. They would know how the dog rescue systems work, generally.

Ohio dog lovers: Susie lives in Ohio. That led me to dog rescue organizations in Ohio. First, to the general no-kill shelter in Toledo. They recommended a Basset Hound rescue in Columbus (about 100 miles south). Friends contacted their dog-loving friends in Ohio. This saved us time because the other rescue in Toledo did not take dogs as big as Susie. That friend also told us about the dog-supporting thrift shop in Toledo.

Social media dog lovers: One thing led to another. Before Joel was buried, Susie had applications in two shelters that would take her, once there was a space for her. There was also a man in Athol, Massachusetts who wanted to take her, if I could fly her to Logan or drive her to Athol.

Ohio dog lovers with social media assistance: Four days after the funeral, Susie moved to a shelter in Toledo. It took a few days to get her health status confirmed. Then she was listed for adoption. Once she was posted, social media friends spread her picture far and wide to all their Ohio and Michigan friends and family.

Another death and Susie reunited

Philadelphia dog lovers: Joel moved to Toledo for a job in July 2021. Before that, he was working in a court in Philadelphia. Susie went to work with Joel in Philadelphia, so she was well-known to Joel’s work fellows. She was known as the court’s mascot. All the clerks loved her. When the judge there retired, Joel took the Toledo job.

The week after Joel died, so did that retired judge. When a Philadelphia former coworker called Joel about this — and didn’t hear back — she searched and eventually found Joel’s obituary. She called us.

She is from the World of Dog Lovers. As fate would have it, her in-laws were looking for another dog because they had one who died (of old age) a few months ago. She talked to them about Susie, and it seemed like a good match. Susie is going back to Pennsylvania with detailed references to her new people. Their daughter-in-law knows Susie and could speak for her. This gives us a lot of confidence. The folks in her new home heard all about her: the joy and over-exuberance of this pup, as well as her sweet and loyal nature. That is the kind of environment Susie needs to grieve and reattach to a new family.

Susie had safe options on her trip from one home to another. Not all dogs get this luxury. She was boarded for pay, then housed at a shelter and prepared for adoption. This is a success story for a good dog.

I don’t cry much. But I sobbed with relief that Susie has another family – one the includes an old work fellow. There is something about the pathos of knowing that Susie doesn’t know what happened to her Joel, and why he left her.

Susie’s successful transition wouldn’t have happened without the help of our extended village in the World of Dog Lovers. We are deeply grateful for all the support from our village and from Toledo Animal Rescue and Buckeye Basset Hound Rescue (the one in Columbus).

We hope everyone who loves a dog can get a long little doggie.