Can a community uphold a restrictive covenant that says that only people “of the white race and the Christian persuasion” can own houses in their community?

All communities have rules. Your town or city has zoning and building code rules. Smaller, non-governmental communities also have rules. For example, a condo association may restrict residents from smoking in the building or having pets. This is enforceable because the condo rules are part of the structure of the condo docs that govern the use of the property. Rules about pets, exterior paint colors, noise, or smoking are all legal and reasonable to enforce, if the residents agree to them.

Can a condo association agree that all owners must be “practicing Christians”? Generally, the right to discriminatory exclusion like this does not stand up to court challenges. 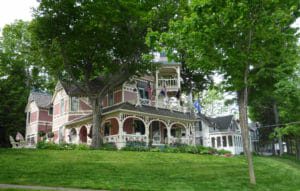 Here’s the situation at Bay View in Michigan.

How does a rule like owners must be “of the white race and the Christian persuasion” get put in place?

When the Bay View Community was founded, it was a Methodist retreat community. The requirement for owning within the complex was to be at least 21 years of age and of “good moral character.” The definition of “good moral character” was clarified to mean Christian only and White only (with a 10% quota for Catholics), in the 1940s. In the 1950s, it was modified to Christian only (requiring the support of a minister who will vouch for your active church participation.) This rule, like a condo rule, can be amended by a vote of association members or the elected delegates of association members (depending on the wording of the association documents.) In the 1940s, the association voted to ban non-Whites and non-Christians. In the 1950s, they voted to not overtly discriminate against non-Whites or Catholics.

In recent years, association members tried to remove the discriminatory rule against non-Christians, but have failed to get the two-thirds majority needed to change the charter. They resorted to a lawsuit. The lawsuit against Bay View, by current owners, states that Bay View is in clear violation of anti-discrimination laws. The lawsuit contends that people who come there do not, necessarily, come for the spiritual components of activities there. Some long-standing owners of many generations now have non-Christian (and non-White) family members; those family members are restricted from inheriting that properties.

At Bay View, participation in Christian programs is not required. The town boasts of beautiful scenery, recreation, and an award-winning music festival. Yet, people who are not Christian cannot own property in the community.

Were this a single camp, with cottages that are rented for the summer, it could still look like a private club. But Bay View is a community. It has nearly 500 houses, some of which are very valuable, and more than 30 public buildings.

There is a reasonableness about the contention that the community was established as an arm of a Methodist Church, and exists for the spiritual benefit of summer residents there. But, the timing of the increased restriction (1940s) smells like White Christian privilege. The removal of the White-only ban in the 1950s speaks to the community’s awareness that such discrimination would be called into question. I am hoping that the ban on non-Christians will not be upheld by the courts, even in the current Administration.

Timeline of Bay View at Wikipedia