Tuesday, May 25th was the one-year anniversary of the murder of George Floyd. That was the Monday of Memorial Day. This public and brutal murder is now associated with Memorial Day in my mind. It is hard for me to believe that it has only been one year since George Floyd was murdered, in public, by Derek Chauvin. Time moves oddly during the pandemic and its aftermath.

Thanks to multiple eye-witness accounts and a video, America could not turn away from the events of the day. A year later, the consciousness of many white Americans has changed. This has led to some changes to police procedure, but more importantly, it has increased awareness that public opinion matters to sports federations (like the NFL and NASCAR) and businesses like Amazon and McDonalds.

What has changed since then? The New York Times published a comprehensive list.

How can police officers both prevent crime and behave less violently, so that they kill fewer Americans while doing their jobs?

Through last weekend, police officers continued to kill about three Americans per day on average, virtually the same as before Floyd’s murder.

Is America different on Memorial Day 2021 than it was last year, before we ever heard of George Floyd? Not enough.

The debate about police has changed. But not enough. As the Mapping Police Violence website notes, police are killing civilians every day. If you go to the link, you will see the tally. When I wrote this on May 26, the number was 414. Once you get there, look at the charts below. I especially encourage you to put in your favorite city police department in the “Police killings by the _____” section.

Boston police have killed 13 people since 2013. That is a fairly small number. However, notice how many were Black folks. Black people are roughly 25% of the population in Boston; even if you add mixed race people to that number (5.3%), people who “look” black are no more than 30% of the people who live in Boston. Yet police killed 10 people out of 13 who were later identified as Black.

Police reform is happening. Body cameras are more common, brutal practices, such as chokehold restraint are being banned, yet civilian death at the hands of the police continues. And those deaths are disproportionately the death of Black people.

Defunding the police is a concept that does not have enough traction to take hold yet. If it scares you to consider it, think about a stand a few steps shy of that. Clearly the status quo is not what America should look like. 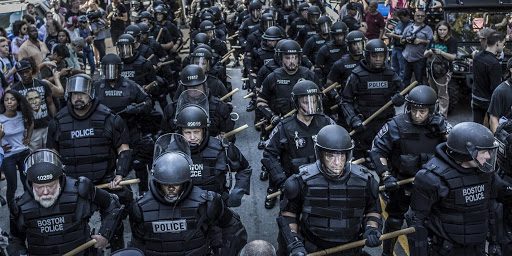 Should the police look like this when they are called out to “keep the peace” at a rally? This article was about a “Free Speech Rally” that drew a strong counterprotest in 2017. No one has a problem with “free speech.” However, these free speakers were alt-Right members of neo-Nazi organizations. The police were out in large numbers to protect a small number of speakers who came to share alt-Right ideas. The protesters were unarmed and fully separated from the speakers by large barricades.

Remember when the Boston Police killed an Emerson College student as a Red Sox victory celebration? Police were using rubber bullets at that time.

Can you get behind demilitarizing the police? This military gear is expensive. Would you stand behind defunding police for tear gas, rubber bullets, tanks, battering rams, and other military gear?

While we are talking about the military

Today is Memorial Day. War is hell. People die. Those who died as part of their service to our country have paid the ultimate cost. Their families were never the same without them.

Please honor military families today, especially those who lost loved ones to combat.