I had a conversation with a young friend of mine who just passed the Bar in Massachusetts. He was a bit chagrined that his loan paperwork was so hard to understand. He said something like: “I interpret documents all day, but this makes no sense. The numbers just don’t add up.” My friend is far from stupid. But, unless you know the history of the Truth In Lending Form, it will make no sense to most people. 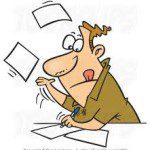 The reason there is a truth in lending form is that there used to be a lot more untruth in lending. Back in the very-bad, very-old days, lenders would trick people by quoting low interest rates without telling the borrowers what the fees for that loan were. By jacking up the fees and service costs, they could make a lot of money on the mortgage and give the borrower an awful deal. That gave birth to the Annual Percentage Rate (APR.) That was 1968.
Borrowers could not compare apples to apples in mortgages by shopping the interest rates in the absence of shopping those rates with the fees. The APR is the rate you pay if you add in the fees and service costs, then amortize that total over the life of the loan. So if your APR is a lot higher than the rate you were quoted, then your fees are high. Since the Truth in Lending Act, borrowers can compare loans APR to APR. With this information, a consumer can choose a loan that works best for his or her situation. (Some people can pay fees and get a lower rate, some are more cash-strapped and will do better with a lower fee mortgage.)
Now look at the form.
The first box on the Truth in Lending Form is the APR. In the box, the explanatory caption is “The cost of your credit as a yearly rate.” Now that’s clear. My friend’s APR was 2.933%; his quoted rate was 2.8755. He thought he’d been baited and switched. I explained to him that this figure added all his fees in, then figured his true interest rate, based on those costs. I told him about the history above.
The second box is captioned, “The dollar amount the credit will cost you.” My young friend says, incredulously, “I am paying $50,000 in fees?” No. That is the total amount of interest, plus the closing fees if you keep the mortgage until it is fully paid off. It does not mean there is a one-time $50,000 bill to get a mortgage.
The third and fourth boxes are more straightforward. Box three is captioned, “The amount of credit provided to you on your behalf.” Simply said: the dollar amount that you borrowed. Box four reads, “The amount you will have paid after making all payments as scheduled.” That equals the total of box two and three. It does add up.
Later the Good Faith Estimate was born. (I’ll write on that another day.)
Have you been baffled by mortgage paperwork? Did the Truth in Lending form make you suspicious the way it did my friend?

4 Responses to "Why does Truth-In-Lending feel like a bait and switch?"