York, Pennsylvania is becoming the poster-child town for the intersection of “Make America Great Again” intolerance and liberal tolerance.

Walking the city, there are signs of deep American roots as well as signs of tolerance and welcoming of minorities. The city of York has about 40,000 people, a black mayor, and is majority Democrats.

The surrounding countryside has about 400,000 people, is mostly white and is strongly Republican. The voters there came out in huge numbers for Trump; it made a difference to winning Pennsylvania last year. 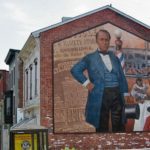 Since then, friends and family have reported unfriending one another on Facebook. They report tense conversations at family events. The intolerance is hardening on both sides of this divide.

The Voc-Tech High School Made National News. Then made changes.

Adults practice avoidance, but the students at the regional vocational high school don’t have that option.

Much of the county can practice avoidance, burying their differences behind their routines of work, shopping, family life. Not so the kids streaming along the linoleum-lined hallways of York Tech, a crossroads of cultures where the student body is 62 percent white, 17 percent Hispanic, 10 percent black, and about 11 percent multiracial. source

There was national focus on this high school when students carried “White Power” and “President Trump” signs down the hall the day after the election. Black students walked out in protest shortly thereafter. The administration took steps to keep the peace. Minority students (Hispanic, black, multi-racial, LGBTQ) now have an adult on staff for support.

Fast-forward, one year later. There was a very “non-controversial” Black History month celebration, an event honoring family stories of immigrants, a Day of Silence event for LGBTQ students, and a reggae concert that got the white students up and dancing. The new school year began with flags in the central hall, representing all the origin countries of the student body and a T-shirt added to the uniform options that supports diversity.

Is there resentment from white MAGA supporters? Sure. Are minority students being included in the school community? Sure. Has the administration walked the line between free speech and safety? Probably.