The economic problems of the United States Postal Service (USPS) has become a pawn in a political battle. It deserves better than that, and so does your mail handler.

Our government had a mandate — right from the beginning — to be able to send mail to everyone. We depend on it. Even if you no longer pay bills by mail, during this pandemic, chances are you bought things that were delivered. Private shippers, like FedEx, cost more than USPS for small businesses. Without the USPS, these businesses could go under.

The USPS train their staff to deliver “every piece, every day, every address.” Suddenly, they are being directed to let mail sit, undelivered. One employee said that this is “poisoning the well, then telling people that the well is no good.”

About the USPS economic woes:

Without going into the specifics, the USPS does not make ends meet. There are a few reasons.

In August, so-called “lean and mean” postal services got launched. Overtime was cut. Delivery boxes were being removed (to shorten collection staff time). Postal workers were told to let the mail sit, undelivered.

Simultaneously, the USPS has been making security changes related to post boxes. Identity thieves were fishing in post boxes for mail. So, the USPS moved to redesign boxes to make that impossible. It also prevents bombs or other nefarious packages from being dropped in these boxes. 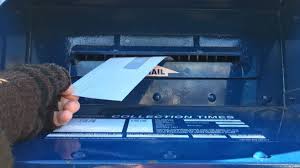 When did you have that moment when you tried to mail a letter and found out that there was no door to pull down anymore? Did it shock you for a moment? That’s okay. That’s a security thing. It has nothing to do with the mailbox removals that happened in August.

Now about your ballot:

Every national Presidential election is high-stakes. This one is higher than usual.

Mail-In Ballot is a legal ballot that is mailed to a person and mailed back to the election authorities.

Mail-In Ballots are also called Absentee Ballots. They are commonly used by military personnel and people who travel frequently. 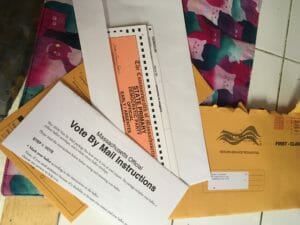 In some states, all voters are getting an application to use a mail-in ballot automatically. In the past, a voter would need to apply for the ballot (sample).

In most states, voters do not need to say why they can’t vote in person. Even in the past, this was not an onerous question.

There was a primary in 2018 on the Tuesday after Labor Day. I planned to be out of town on family business in August. I was not sure that I would be home for this election. I got an absentee ballot. It was easy.

I learned this system in 2018. I did, in fact, arrive home the day before the election. I went to vote in person and was stopped by the sign-in person. I needed to present my absentee ballot, so it could be destroyed. That is the system that prevents voters from voting twice by getting an absentee ballot.

Fast-forward to 2020. In some states, absentee ballots were sent, automatically, to the current address of every registered voter. There will be many more mailed in and dropped off at municipal sites. There will be fewer people voting at the polls. This will be a good thing, if Covid-19 rates go up again around November.

For 2020, there is a computerized system tracking all those mail-in/absentee ballots. For Massachusetts, find it at Track My Ballot.