Knowing how to de-escalate a situation can save your life.

Three years ago, I wrote about a woman held at gunpoint while she picked up a car she had already purchased and registered. I reprint it below.

Wow! Nothing has changed, except maybe your awareness.

Pop quiz 1: There is a person using a screwdriver to change the license plates on a car. From a distance, the person looks like an African American teenager, wearing casual clothes. What do you do?

Here’s what happened to Tonya Jameson, a middle-class, professional woman who bought a used SUV. Ms. Jameson is Black. 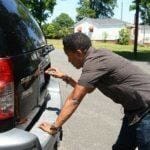 She negotiated and purchased a used car and arranged to pick it up from the former owner’s driveway. While changing the plates, an off-duty cop (and the son-in-law of the former owner) pointed a gun at her, then called the police.

The off-duty officer did not look at the bill of sale. The patrolman who arrived in uniform looked at the paperwork, but did not release her until there was confirmation from the former owner’s daughter.

Whose responsibility to de-escalate the police?

That July, there was a Google Doc I saw a few times. [it’s gone now] It was about abolishing policing in America. When I first read it, I thought, “Wow, that’s radical.” The more I sat with it, however, the more it made sense to me.

I see the misconduct here as consisting of these things.

Yet after an investigation, none of the actions of the policemen was considered wrong. Not in 2017. And probably not in 2020.

Is it our job to de-escalate the police, or is it their job to calm themselves?