It’s Memorial Day, and I’m thinking about the military. I hope you have a lovely holiday weekend. However, “happy Memorial Day” is strange; it is a national day of mourning.

Memorial Day started just after the American Civil War. It was then called Decoration Day. By the end of the 19th century, it was called Memorial Day to honor the fallen soldiers of every American war. This holiday was intended to be a day to honor and grieve for the lives of combatants in America’s wars.

The military people I’ve known deserve this holiday for taking on the all-consuming job of soldiering. Some saw combat, some prepared for combat. They all lived-breathed-ate-and-slept American defense for some years. It is labor, and I am glad that good people did this job. Veteran’s Day is designed to express gratitude to those who came home. This is the weekend to reflect on those who didn’t return from that job.

I am the child of a World War II vet. 50 million men between eighteen and forty-five registered for that draft. 10 million were inducted in the military. 416,800 died as combatants. I grew up learning the history of that war. America was on the right side, we won. Fascists and God-kings were thwarted. Germany and Japan became our allies and the world was set right. Memorial Day parades were fun. My father wore a uniform and carried a flag down a main road in our town. We ate in the backyard, usually for the first time for that year.

I was a child, then a teenager, during the Vietnam era. I came of age during a time of questioning righteous war versus economically motivated war. As an adult, I see them all as, at least partly, economic.

Profit: People and governments profit from war, if they are on the winning side.

“Just war” (World War II) also had economic winners and losers. The rightness of the moral purpose of the war does not affect the on-the-ground economic impact.

Wars are good for business: Manufacturers love war; they make war machines, uniforms, packaged food, and so on.

Land and material gain for local people and governments: During World War II, the homes of deported Germans, Austrians, French, and eastern European people were granted to local people and military folk. The material goods, including art, were seized by the government. The wealth of the people killed in the German extermination camps went to the German government, or the people who lived near the abandoned houses.

Likewise, in World War II, 120,000 Japanese-Americans (including American-born citizens of Japanese heritage) were relocated into isolated camps. Their homes, businesses, and possessions were either sold in a big hurry (at steep discount) or forfeited to the local people of European heritage.

The blurred line: civilians and combatants

War is not the only way to shift economic gain towards one group of people and away from another. There are non-war ways to alter the balance of power.

Policy: Many of the causes of the racial wealth gap are not violent. They are policy-based. American housing policy disadvantaged BIPOC people throughout American history. To understand the structural racism barriers to purchasing and maintaining housing, view this video. Simliar policies are in force in other realms of American economic life, including how education is paid for, how health care is distributed, how food is distributed, how convicted criminals are sentenced, and other life and death aspects of people in America.

Who profits when policing looks increasingly like military force? This military gear is expensive. How it is deployed needs scrutiny. When the police come to a demonstration armed for war, are they more likely to get a war? Has the casual use of military equipment (and guns in general) changed the dynamic between the police and people on the street?

During the Vietnam era, Americans were shocked by police who used horses, tear gas, and guns against peaceful anti-war protesters. Since that time, police are increasingly deployed with riot gear during peaceful demonstrations. 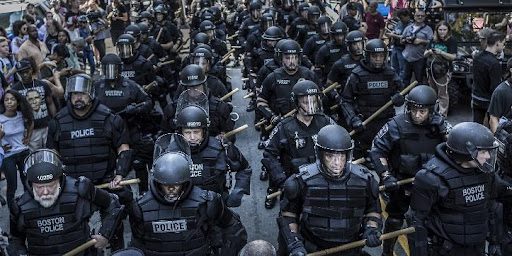 Should the police look like this when they were called out to “keep the peace” at a rally in 2017? Link to info about this rally here. In 2017, police were out in large numbers to protect a small number of speakers who came to share alt-Right ideas. The protesters were unarmed and fully separated from the speakers by large barricades. The police allowed alt-Right supporters into the counter-protest area, but not the other way around.

Remember when the Boston Police killed an Emerson College student as a Red Sox victory celebration? Police were using rubber bullets at that time. It was deadly, none-the-less.

This Memorial Day is harder than most for me. It is hard to honor the lives of the men and women who pick up arms and died in the military.

When I see a military assault rifle, I see the recent domestic terror in Buffalo, New York and Uvalde, Texas. That was just in the past week or so. When I see that kind of weapon, I don’t see a soldier holding it.

It is also the ease in which angry (mostly) white guys use military-style weapons on people going about their business in America, whether they are shopping, in school, in church, in night clubs, or any of the many places where people go. It is a dishonor to American soldiers that their service is tainted by those who use military-grade weapons against people on the streets of America. These gunman frequently state that they see killing these civilians is fighting a just war. I see it as terrorism.