When neo-Nazis marched through the city — for the third time in two years — they were met by brightly colored banners supporting love and a cacophony from the many plastic whistles given out to the counter-demonstrators.

The city was Berlin. The year was 2018. The initial organizing came from a bookstore.

Bookstores are part of the political fabric of a community.

Generally, bookstores attract people who read and grapple with ideas, so when Nazis began marching in Berlin, the bookstore owner contacted the store’s client database to form the core of the counter-demonstration. They were joined by others to reclaim the public space from the Nazis.

Here in America, bookstores have been gathering places for political thought, too. City Lights  in San Francisco is such a place. So was New Words Bookstore, which was in Inman Square (until 2002.)

Berlin and its Nazis

All Germans of the Hitler era were changed by the experience. Their children were affected, too. The curriculum for German students includes the Nazi period. The children learn the stark history of genocide, at different points along their education. Germany has reconciled its past. So the rise of neo-Nazis is troubling to this generation of Germans. Despite the cold morning of the Nazi march, the counter-demonstrators will be there in force.

Throughout Europe, and in America, fascism is becoming a visible force. The ongoing strategy question remains whether to entirely ignore them, or the take the public space when they do. Both have their pitfalls.

In Montana, the counter-protests were held in an entirely different place. The parties supporting love were well attended and dwarfed the neo-Nazi action. A march, set for Martin Luther King, Jr. Day 2017, was cancelled. That was a victory. 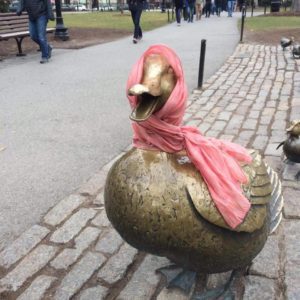 What did Boston do? A little of both:

August 19, 2017. The week after Charlottesville, neo-Nazis held a rally on Boston common. About 150 of them showed up to a crowd of about 40,000 counter-protesters. A few people were arrested.

November 16, 2017, the same group returned to the Common, about 75 of them. They were met by a crowd of about 150, mostly legal observer-trained people. The news was that it was no news.

If there are more public marches of neo-Nazis and White Supremacist, each community needs to consider whether they will give the street up to haters, or face them in the public square. It is a hard decision to make. Where do you come down on this?