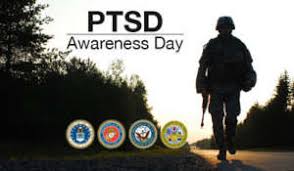 Post Traumatic Stress Disorder affects our armed servicepeople who experience trauma during war. It is also the pain of people who have been traumatized by domestic violence, domestic (American) terrorism, and some traumas of “normal life” like house fires, car crashes, or the death of people one loves.

It is estimated that 224 million people have experienced trauma in America that could cause PTSD. Statistically, 20% of traumatized people develop the condition. (That’s almost 45 million people). [source]

What PTSD does to the brain

PTSD causes a change in what the brain pays attention to. People with PTSD are thinking about the traumatic event, subconsciously, and trying to avoid it or anything that could be like it. People with PTSD can be suddenly reminded of the trauma–feel it again as if it is happening right then–during mundane normal life. This vulnerability can make people avoid other people and normal daily activities. A dramatic example is someone who was car-jacked who can’t travel in a car without having panic attacks.

PTSD could also make someone hyper-alert to the smell of roses, 20 years after the death of the person who send them to them. The person with PTSD may not even be aware it is about the roses; they just know that they cry uncontrollably while walking down the street in June. They feel out of control and don’t understand what is happening to them.

PTSD is diagnosed if the symptoms interfere with daily life and continue for at least a month. Symptoms of PTSD are classified into:

Imagine feeling this way. You feel suddenly afraid or out of control at random moments, so you avoid people and activities you used to do. You aren’t sleeping well. Your brain is overloaded by the constant, subconscious awareness that you may be suddenly be out of control. You are still afraid of the trauma (be it another car-jacking or that someone else you love will die), even when nothing is happening – in real time – that puts you in danger. Your brain is overloaded, like a computer that is running a complicated program in the background. You are lonely, because you don’t get out much. You might get depressed.

If you don’t get professional help, you might turn to drinking or drugs to numb the pain of it all.

American culture has a thing about being strong. People with PTSD are not weak. They are stuck in a moment of fight-flight-or-freeze. Professionals know how to help people move away from those moment and back into life, where good things happen as well as bad ones.