My neighbors have a new tenant who is not paying rent. The family moved in late last year. I have been watching. There’s been no move to evict them.

I know these tenants. Their family, or a family just like them squatted at my house in 2014-2015. It took two rounds before we successfully evicted.

Like most wild animals that live in urban areas, squirrels have adapted to live happily among humans. They chew through soft wood to get into attics, then immediately find another soft spot in the wood to create a back door. (This is the same thing that burrowing animals do, so they won’t get trapped by a predator in the burrow.) They love having a roof over their heads. The more insulated, the better.

The humane way to evict squirrels is to give them a chance to leave and no way to get back in. Our squatters chewed through a corner in the front of the house. The exterminators sealed up that hole and put a one-way door on the other hole (which was on the side of the house.) 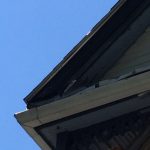 We had to wait about a month before we could start eviction. The squatters had babies in there. If we evicted while the babies were in the nest, the parents would leave, but young babies would dehydrate and die. That is bad for everyone: the babies would suffer and die, our tenants would hear it, and then smell it. Just wrong. So, when the babies were gone, we evicted. An experienced rodent exterminator knows the times of year when squirrels breed. We took their advice and it was correct. 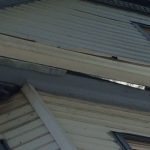 The next fall, they returned. Squirrels remember their nests. These squirrels could have been the parents or the offspring. They found another way in behind the gutter. This called for a second eviction process (before they had time to have babies). We had a warranty and the exterminators came back, gratis, for a year.

Last autumn, I noticed where the family had moved to. The house across the street has been recently renovated. You would expect there to be no soft wood there, but, noooo. 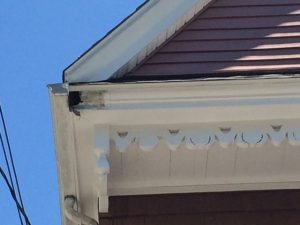