I come from a family that values perseverance. Stick-to-it-ive-ness is a good thing, if there is more positive coming from it than negative, or if there is an end goal in sight. No one could get an M.D., Ph.D, or write a book, or raise a child without it. Perseverance keeps us from quitting our schooling, our jobs, our relationships, or our healthcare routines during the – inevitable – times when they are no fun.

Perseverance for perseverance’s sake is counterproductive. The time, effort, or expense that brought you to the current moment is one thing. Your next move is another. When you hold onto a bad outcome in hopes that it will change, you may be staying mired in something bad for too long. That is how people in my family stayed in jobs and relationships that made them unhappy for decades. The downside of perseverance is the sunk cost fallacy.

The Sunk Cost Fallacy describes our tendency to follow through on an endeavor if we have already invested time, effort or money into it, whether or not the current costs outweigh the benefits. [source]

Why Individuals Do the Wrong Thing:

The Decision Lab used a simple example of the sunk cost fallacy regarding an individual. Imagine that you purchased an event ticket for $50. The day of the event you don’t feel well and the weather is nasty. People who already paid for the ticket are more likely to go anyway, even though they are not likely to have a good time. (This is obviously pre-Covid. Now, sick people are being hugely selfish if they go out in public while they are sick.)

Although Decision Lab doesn’t mention this, in business I often see events charging more at the door than for advance sales. Thinking about how I and other people I know behave, the advance sales are a better bet for the venue. If the tickets are for sale at the door, the buyers are more likely to stay home if the weather is foul. Can you remember feeling that way – regretting the cost of a ticket to something you are bound not to enjoy due to a change in circumstance? Did you go anyway?

I’ve done both – persevered when I didn’t really want to and regretted the waste of time or money that went into the initial plan.

Governments, like large ships, are slow to turn around.

Think about Afghanistan. Once Americans got the idea that we were in Afghanistan to protect women from Taliban oppression, leaders were reluctant to retreat without that objective won. Withdrawal from Afghanistan creates a sunk cost not only in dollars, but in lives lost and soldiers injured, and some permanently disabled. How could we let that carnage be in vain?

The Afghanistan mission started with homeland security: stopping training bases for terrorists there. That mission was fairly successful. When the mission became keeping the Taliban out of power, instead, it became the longest war in our history. No leader wanted to take the responsibility of saying, “The situation will not get better. We need to make a decision that works, going forward, to stop the drain of money and lives.”

This summer, I have been reading about another American military action that ended in the leadership change that Americans were fighting against: Vietnam. In that war, too, our leaders knew that there was no good way out of the military conflict.

There is value to the amount of time that has elapsed since the end of the Vietnam War. I learned some of what went on then from the nightly news, some from within my family, and much more a history began to be written. 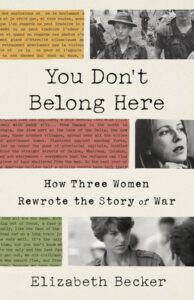 I recommend You Don’t Belong Here: How Three Women Rewrote the Story of War by Elizabeth Becker. For me, it reiterated and organized events I knew about as well as introduced me to events and books I did not know about.

Unfortunately, I see too many parallels between the American entry into conflict and withdrawal from Vietnam and from Afghanistan.