From the first breath uttered about doing early voting and voting by absentee ballot (by mail), the Republican rhetoric labeled these votes. 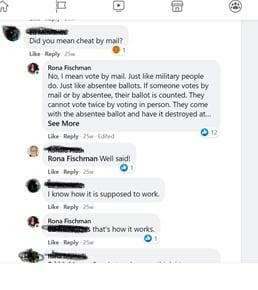 I had a Facebook exchange on this, in May, 2020. When I posted that California would vote by mail. A conservative friend of mine immediately chimed in, using the negative spin that he heard in his echo chamber.

Knowing verbal self-defense, I answered without repeating his negativity about the American voting system.

How the messaging affected the vote

Before the November election

Here in Massachusetts, we were lucky. We had a contested primary for Senator in September. That primary provided a chance to test out the system before the national election. The primary showed the problems, so they could get fixed. Mostly, the system worked well. Voters could track whether their ballot had been mailed to them, track that it was received by the commonwealth, and track that it was accepted (or not). There was one notable problem in September, where ballots were undercounted. The computer records of accepted ballots worked. Ballots could not be double-counted. Uncounted votes could be identified.

Nationally, the news outlets serving conservative voters questioned the process well before November. Thus, this questioning mobilized the Republican base, when the inevitable happened. Conservative media reinforced the value of “I’ll stand in line and vote. It is my American duty. I am not afraid of Covid-19.” That message of “Real Americans vote on Election Day” was a Republican-leaning message.

Election Day and after

During the week of November 3, 2020, there were numerous efforts to stop the counting of mail-in ballots. This was led by Republican groups and was an attempt to not count votes sent by mail. Some were failed legal challenges, in court. Some were intimidation tactics foisted on the vote counters. The FBI foiled a planned armed attack on vote counters in Philadelphia. This week, there was evidence that the Trump administration intentionally slowed down the mail via the United States Post Office at the time when voting would be happening by mail.

By Saturday, November 7, enough votes were counted that state officials in Pennsylvania and Nevada could call their elections. The vote counts continue, but the winner could be called. The remaining votes would not change the results.

By Sunday, when I wrote this, results from Arizona were also completed. The electoral college vote was 290 to 214. The final tally is still to come. There are twenty-one electoral votes outstanding, while North Carolina and Georgia complete their vote counts. The popular votes gave Joe Biden in excess of a five million vote lead.

If you care about democracy, if you recognize the fact that voter fraud is not a problem, then please stop using the GOP term “legal vote.” It is a term of voter suppression.‬

‬ The term “legal vote” is as fictionally fraught and functionally racist as the terms “illegal alien” and “race neutral” and “welfare queen” and “handouts” and “super predator” and “crackbaby” and “personal responsibility” and “post racial.”

The GOP will lose the Presidency, and may lose the U.S. Senate, but if Americans commonly start using the term “legal vote,” as if there’s a horde of “illegal votes,” then the GOP would have won the narrative war to defend the voter suppression that allows them to retake power. [Source]

One Response to "The American Vote"