There is cultural change afoot.

White people call the police on Black people who are doing legal, normal things that a white person would do without comment. (Look it up: #LivingWhileBlack.) In the past few years, more of these white aggressors are being called out. It’s gotten to the point where “Karen” has become a slang term for a white woman who calls the police on a person of color who is doing something legal and non-threatening.

(Certainly, every woman named “Karen” is not like this. I have some friends named Karen; I apologize for repeating the term. However, you may see the term used on other forums, so I am following the convention. Now, I will continue, calling the white woman by her name, or “white woman” or “white guy.”)

Making a snap judgment about someone is prejudice. If the activity were being done by a white person and it would have gone unremarked or settled with a conversation, this is microaggression. I wrote about this last week. Acting on it by calling the police is aggression. Black people are justifiably afraid of police encounters. 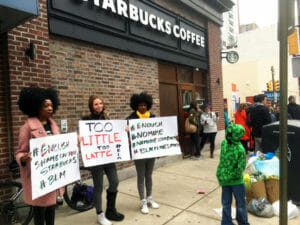 Someone who calls the police because a Black person is sitting in a Starbucks, waiting for someone, is at least committing microaggression and may be openly aggressive. At a minimal level, it is a message that the Black person is not welcome, and that Black people are too scary to talk to directly.

If the police are aggressive, that Black person may be arrested or even killed for no reason. In the Starbucks case, the two Black men spent eight hours with police because they didn’t order coffee fast enough.

Things are different when there’s a video

Since 2017 or so, active bystanders have been making video of self-righteous white people who speak in the name of law and order. These white people try to stop Black people from doing the normal things that white people do. Rather than talking to the Black people, they order them around; if the Black person resists, they resort to calling the police. Here is a compilation of these videos.

At first, the goal of these videos was to shame and call people out. Nicknames like BBQ Becky, Permit Patty, and Golfcart Gail were used to describe these stories.

Why is shaming white aggressors important? Because the stakes are high for Black people. Police don’t always stop to listen to Black people’s side of the story. 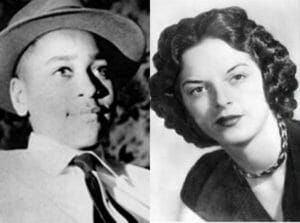 Last week, I wrote about Emmett Till. He was murdered after being accused of flirting with a white woman. A recent accusation just like that happened to a nine-year-old. A bystander caught the threatening tirade of the woman as she called the police. But, in modern times, there was a surveillance video at a corner store, which “proved” that a nine-year-old Black child did not grope an adult white woman; his backpack rubbed her. As it is, the child was screamed at and threatened that he was going to jail. He was in tears. He didn’t know what he did.

The white woman got the nickname Cornerstone Caroline. That video is among the ones shown in this link.

I believe the tide has turned. Now, there are starting to be consequences when police are called for no legal reason.

Two examples of the turning tide against racism

Just before the now- famous death of George Floyd, a Black man named Christian Cooper asked a white woman to leash her dog in an area of Central Park where leashing is required. She did not comply. If this was a microaggression, she would have checked herself then and said, “OK, you’re right, I am supposed to leash my dog here.” Instead, she continued to break the law and ignoring the Black man’s reasonable request.

The white woman escalated her authority by threatening to call the police and tell them that a Black man is threatening her. When she called, she claimed her life was in danger. If you have not seen the video, do so.

Analysis of the situation

Amy Cooper, the white woman, assumed that it is reasonable that police would side with her. She is white. She claims the right to be frightened and the right for police to protect her. By exaggerating the threat, she was calling for quick action on her behalf. She filed a false claim to the police (no one was threatening her life) while she herself violated the leash law. That video shows her fully in control of herself when she says she’s going to call the police. She sounds like she’s being attacked when she called 911.

Was her intention racist? I would say, yes. Were this a slip into old socialization that only white guys have authority, she would have backed down and leashed her dog when Christian Cooper asked her again. That is a reasonable request. However, she felt entitled to ignore it when Christian Cooper persisted in asking her to comply with the law. Would she have ignored a white man asking the same thing? Probably not.

Therefore, she was treating this Black man as someone who cannot ask her to comply with the law. She held onto her right to let her dog run in a leash-required part of Central Park because the person asking her to leash her dog was Black.

She then escalated the racism by recruiting the police to help her, because she felt attacked. Would she have felt attacked by a white man saying the same thing, in the same tone, from the same social distance? Probably not.

Expecting a Black man to back down because the police are coming is both pragmatic and racist. Amy Cooper was accusing a Black man of being physically threatening (which was a lie). But, that kind of lie is known to go badly for Black people. Amy knew it, and Christian knew it.

You can’t live there: you’re not white

June 13, 2020. A white woman, Lisa Alexander, approached a Filipino man in the very exclusive/expensive Pacific Heights part of San Francisco. She informed him that he could not stencil “Black Lives Matter” on the wall in front of his house. She insisted that knew who lived in that house, and he was breaking the law. She threatened to call the police. Here’s the video.

Analysis of the situation

It was none of Lisa’s business that James Juanillo was stenciling on someone else’s property (not hers). If she saw a white man doing it, she might have walked right by. Her actions show that she noticed something was wrong. What was wrong was that she “knew” white people lived in Pacific Heights.

The homeowner, James Juanillo, had lived there for twelve years. This was the first time that Lisa Alexander, or her husband, Robert Larkin ever spoke to him. They “knew who lived there” and “knew” James did not.

John Newmeyer co-owns the house where Juanillo and his husband live and said he does not know Lisa and Robert. “This is the kind of assumption that’s a subtle racism,” Newmeyer said of the interaction. “I mean, it’s not that vicious but still shows us a lot about how far we have to go. Don’t assume just because someone is a person of color he doesn’t belong.”

I disagree some with John Newmeyer. It is vicious. In an America where police kill Black people twice as often as they shoot and kill white people, calling the police can be a life-and-death threat. In this case, his housemate, James was not harmed in this encounter. He knows the local police and the local police know him.

Is the tide turning?  Are companies realizing that their reputations will be harmed if they employ racist people?

One Response to "The Turning Tide"