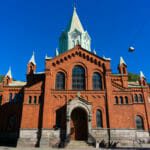 I found myself in a Facebook conversation with well-intentioned Catholic activists with long histories of social action work. I was deeply disappointed. A man I do not know just did not get it.

This is the direct quote of the first part of our conversation:

He: The orthodox Jews look so strange and weird to so many people, it’s difficult to figure out who they are. I know many people who have no idea they are Jews, observant Jews. I have several black friends in the area and resent them taking over their turf.

Me: I am concerned by your comment. Are you saying that looking strange or moving in “taking over turf” justifies murder? That sounds like all the comments made about whether black teens who are shot by police were misbehaving. What happened yesterday was a planned attack on a holiday party. It was intentional murder of Jews by non Jews.

The conversation went on for about 20 rounds of comments. He kept insisting that people on this Facebook thread need to understand the context of the attacks and the anger of the local non-Jews.

The person that started the post was also well intentioned. He tried to make peace. He, too, just did not get it.

His aim was to calm things down. First, by telling me that the first commenter has a long social justice history and it is a given that he stands against violence. Next by calling for unity, by using the words of Robert F. Kennedy.

He did not explain unity for what ideal (since no one was practicing non-violence in Monsey). He, too, was miffed when I repeated that what I was objecting to was an ongoing explanation by the other commenter about how the Jews have made the Christians angry.

In the end, I gave up on this conversation. I was accused of being “angry,” refusing “unity,” and being uncool for questioning the motives of a Christian who thinks now is the time to explain why the Jews in Monsey had it coming.

So. I don’t always succeed. But I do regularly try.

Christian Allies, here is your “to do” list after a hate crime incident:

1. Publicly post that you stand against antisemitism and all racial violence. This is especially important after an incident.

2. Understand murder by hate crime. The actions of the victim(s) are irrelevant to the crime. Picking apart what the victim could have done differently is victim-blaming and can easily be read as condoning murderers. Since you are Christian, you have influence with Christians. If you are criticizing the group that was attacked, you may inadvertently influence others to agree with the murder, as if you are saying that the tension was the victim’s fault and murder is a legitimate outcome.

3. Do not discount the role of hate groups and hate rhetoric in any hate crime, even if the assailant is said to be mentally ill.

4. Do not claim an alliance with Jews based on your Jewish in-law, or cousin, or ex-wife. Knowing Jewish people (or Black people or any other minority people) does not make it so you know it all about that group of people. It does not make you an authority who can discount the experience of the minority person.

5. Don’t tell Jews that you are their ally because you lead tours in Jerusalem. American Jews have a very complicated relationship with Israel and its current government. Our loyalty to America is questioned by haters because they claim that we are primarily loyal to Israel.

Here is an example of what you can do, as Christian, to be part of the stand against hate violence: Letter From Christian Leaders

Next week:
Jewish people’s “to do” list, when talking about antisemitism. There were some cringe-worthy conversations among Jews regarding Monsey, as well.